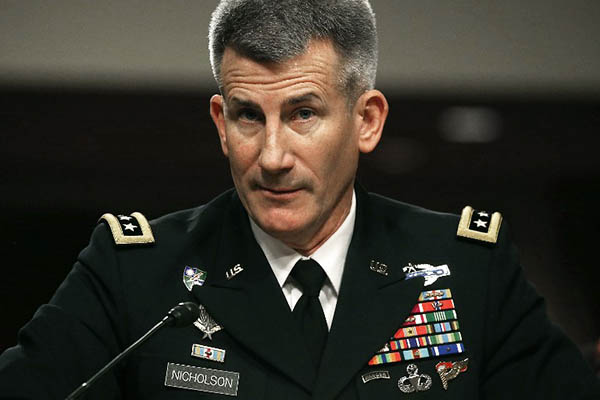 The American general picked to head the U.S.-led NATO mission in Afghanistan warned Thursday it would take years before local forces can independently take charge of what he admitted was deteriorating security.

“Although we’ve seen improvements… in some areas we have years to go, in particular the aviation area,” Nicholson told senior U.S. lawmakers at a confirmation hearing.

Just over a year ago the NATO mission in Afghanistan transitioned into an Afghan operation with allied nations assisting training and equipping local forces to tackle Taliban insurgents and other armed groups. Since then, the Taliban have dealt some stinging blows to Afghan forces, including a short-lived takeover of the northern city of Kunduz.

Further complicating the fragile security situation is the emergence of Islamic State jihadists in parts of the country. They are trying to establish a base in Nangarhar province in eastern Afghanistan, near the Pakistan border.

Senator John McCain, who heads the Senate Armed Services Committee, asked Nicholson if he agreed that the overall security situation in Afghanistan was worsening. “I agree with your assessment,” Nicholson conceded, adding that the Taliban had gone on the offensive more intensely than military commanders had anticipated.

At the Pentagon Defense Secretary Ashton Carter said Afghan security forces would grow in strength in the coming years, describing them as “a force in the making.”

“So we expect the Afghan security forces to be stronger, much stronger this season than they were last season.”

Though several senators enthusiastically endorsed Nicholson’s nomination, his confirmation still needs to be approved by the full Senate.

President Barack Obama in October announced that 9,800 U.S. forces would remain in Afghanistan through most of 2016—backtracking on an earlier pledge to pull all but 1,000 U.S. troops from the country. Numbers would then be drawn down to 5,500 by January 2017, under current plans.