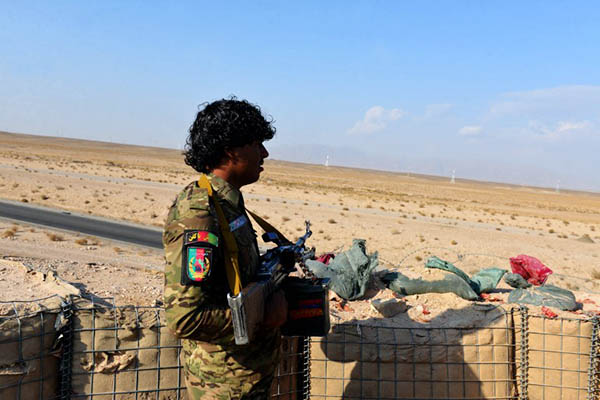 Dozens of Afghan police and soldiers have been killed in a wave of Taliban attacks on checkpoints in Afghanistan, officials said on Tuesday, as insurgents step up assaults on the beleaguered security forces.

The raids in the southern province of Kandahar and the western province of Farah on Monday night came hours after a suicide attacker rammed an explosives-laden vehicle into a U.S. military convoy, wounding four soldiers.

The Taliban issued statements on their social media accounts claiming the attacks.

“I can confirm that last night the Taliban launched a wave of attacks on police checkpoints in Maiwand and Zhari districts and we lost 22 brave policemen,” said Kandahar governor spokesman Qudrat Khushbakht. He added that 45 militants were killed during the fighting that lasted around six hours.

In one of the attacks militants used an explosives-packed police pickup to ambush a checkpoint, Kandahar police spokesman Matiullah Helal told AFP.

At least 15 policemen were wounded in the coordinated assaults.

The attack on the U.S. military convoy in Kandahar added to the casualty toll. “There were a total of four U.S. service members injured and all are in stable condition in U.S. medical treatment facilities,” a spokesman for NATO’s Resolute Support mission in Afghanistan said, adding there were no fatalities.

Farah governor spokesman Naser Mehri said nine Afghan National Army soldiers were killed in two separate attacks in the province bordering Iran that also claimed the lives of at least three civilians. “There are signs the Taliban may have used night vision technology to approach and surprise our forces, though they were spotted before reaching the posts and suffered casualties,” Mehri said.

The Taliban have intensified attacks on security installations across the country in recent weeks in a show of strength as the United States deploys more troops to train and assist Afghan forces. Analysts said the Taliban’s almost daily attacks are intended to show their ability to strike even heavily defended targets with the aim of further demoralizing Afghan forces already beset by huge casualties and desertions.

The Taliban often use bomb-laden armored Humvees and police vehicles stolen from Afghan security forces to blast their way into security compounds. The tactic was used multiple times last month with devastating effect: hundreds were killed and wounded over a bloody few days that left military bases and police headquarters destroyed or severely damaged.

Afghan security forces have faced soaring casualties in their attempts to hold back the insurgents since NATO combat forces pulled out of the country at the end of 2014. Casualties leapt by 35 percent in 2016, with 6,800 soldiers and police killed, according to U.S. watchdog SIGAR.

The insurgents have carried out more complex attacks against security forces in 2017, with SIGAR describing troop casualties in the early part of the year as “shockingly high.”