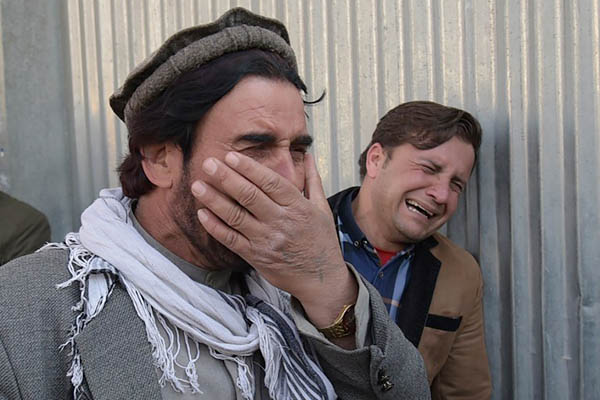 The Afghan security leadership has come under scathing criticism from lawmakers and social media users over a catastrophic insurgent attack on the country’s largest military hospital, with many calling for their impeachment.

Gunmen disguised as doctors stormed Sardar Daud Khan hospital in Kabul last Wednesday, with multiple surviving staff telling AFP that insiders including two interns were among the attackers. The carnage inside the heavily guarded hospital points at a spectacular intelligence failure and spotlights how insurgents have managed to infiltrate top government and military institutions in Afghanistan.

“If I were the minister of defense, or intelligence chief or the minister of interior, I would submit my resignation over the incident in the 400-bed hospital,” M.P. Nawab Mangal was quoted as saying in the local media on Tuesday. Another lawmaker Humayoun Humayoun heaped scorn on Defense Minister Abdullah Habibi, who has been regularly mocked for social media images of him dozing off in official meetings. “The minister of defense is sleeping 24 hours a day,” he said. “I think if we put him in a bag, close it and send it to another country, then the minister will see that he has been taken to another country without a visa and passport.”

The defense ministry insists only around 30 people were killed by five attackers. But security sources and the survivors, some of whom counted dead bodies, said the death toll exceeded 100. M.P.s are calling for the impeachment of Afghanistan’s defense and interior ministers and the intelligence chief, as the country braces for an intense fighting season in the spring.

“How long should Afghan people tolerate this kind of negligence and unprofessional behavior by [President Ashraf] Ghani and his unqualified security team?” one Afghan asked on Facebook, echoing a deluge of similar comments. For its part, the defense ministry said a government commission had been set up to investigate the attack.

Public anger has grown over the episode, with speculation swirling on social media that such a brazen attack on the tightly guarded hospital could not have happened without the complicity of high-ranking officials.

The savagery of the assault was characterized by how the assailants stabbed bed-ridden patients, threw grenades into crowded wards and shot people from point-blank range. The Islamic State group claimed it was behind the attack via its propaganda agency Amaq—hours after the Taliban denied responsibility. But the survivors AFP spoke to said the attackers chanted “Long live Taliban” in Pashto and attacked all but two wards on the hospital’s first floor where Taliban patients were admitted.