Afghan Shias on High Alert for Attacks Ahead of Ashura 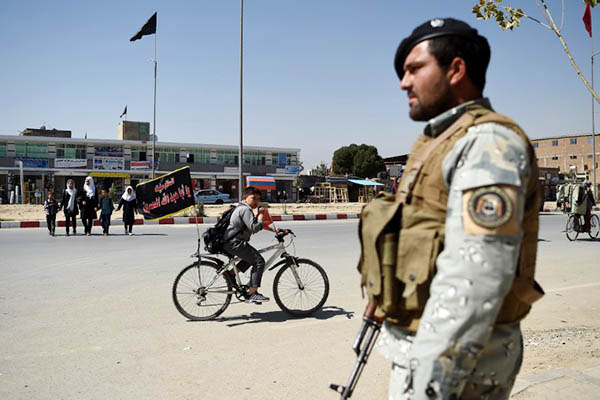 Struggling to protect minority, Kabul has trained and armed over 400 civilians to help defend mosques

Nasim Amiri quit his job selling vegetables to take up arms to defend his local mosque in Kabul, one of hundreds of civilians recruited to protect Shia religious sites ahead of a key Islamic holy day.

Shia Muslims across war-weary Afghanistan are bracing themselves for potential sectarian attacks as they prepare to commemorate Ashura, which falls this weekend.

Taliban and Islamic State jihadists, who belong to the rival Sunni branch of Islam, have repeatedly targeted the minority Shia community in recent years and there are fears they will strike again. Criticized for failing to protect Shias, who number around three million in overwhelmingly Sunni Afghanistan, the government has taken the unprecedented step of training and arming over 400 civilians to help defend mosques in Kabul.

The move, criticized by some Muslim leaders as inadequate, highlights the impotence of Afghan security forces struggling to get the upper hand in the fight against the Taliban and other Islamist groups. The plan may be expanded to more cities.

Amiri has spent decades living near Baqir ul Ulom mosque, which was attacked last year, and knows “almost every” worshipper who comes to pray in its cavernous halls. “I will stand against any threats, I don’t mind dying for my people,” said 43-year-old Amiri. “We are not true Muslims if we don’t go to the mosque during Muharram and for that we need security.”

Ashura—the most important Shia observance—falls on the 10th day of Muharram, which is the mourning period for the seventh-century killing of Imam Hussein, the grandson of Islam’s Prophet. The faithful gather to beat their chests and hit their backs with chains until they bleed in commemoration of Hussein’s death.

But in recent years the sacred day has been marred by deadly violence.

In 2011 a suicide bomber detonated his explosives in the middle of a crowd of worshippers at the main Shia shrine in Kabul on Ashura, killing 80 people, including women and children. Afghan officials blamed the bombing—the first major sectarian attack on a key religious day in Afghanistan—on the Lashkar-e-Jhangvi.

Almost a year to the day later Kabul police said they had arrested two Taliban insurgents with suicide vests who planned to attack Shia worshippers.

Last October gunmen entered the Karte Sakhi shrine near Kabul University and killed 18 people gathering to mark Ashura, an attack claimed by the Islamic State. The following day at least 14 Shias were killed in a bombing at a mosque in northern Afghanistan. A few weeks later Baqui ul Ulom mosque was targeted when a massive suicide blast claimed by I.S. killed dozens of worshippers and badly damaged the building.

It took about eight months to repair the Shia mosque, one of the biggest in the Afghan capital, but the trauma suffered by the congregation has proved harder to heal. “There are fewer worshippers nowadays compared to the time before the attack,” said Mohammad Ali Arefi, the imam at the mosque. “Around a third of the people are afraid and don’t show up at prayer time anymore.”

Sayed Sadiq Hussaini, 80, who survived the massacre at Baqir ul Ulom, has continued to worship at the mosque in defiance of the threats. “No one can stop me from coming to the mosque. I will be a martyr if I am killed in a mosque and while praying,” said Hussaini.

The mosque has introduced tighter security this year including body searches and the deployment of five civilian guards along with the same number of police officers. “We had no other choice but to arm our own people to protect our mosques because the security forces are too busy fighting,” said Siraj Danish, a member of the Baqir ul Ulom mosque council.

Arefi said he planned to restrict Ashura activities to the mosque and its grounds to reduce the possibility of attacks, instead of commemorating the event on the streets like previous years. But the 67-year-old imam said he hoped the government would come up with a better plan to protect mosques than just giving weapons to civilians.

“I don’t think arming five locals will bring a lot of changes to the security of the mosques,” Arefi said.