Afghan Strongman Shows He is Still ‘King of the North’ 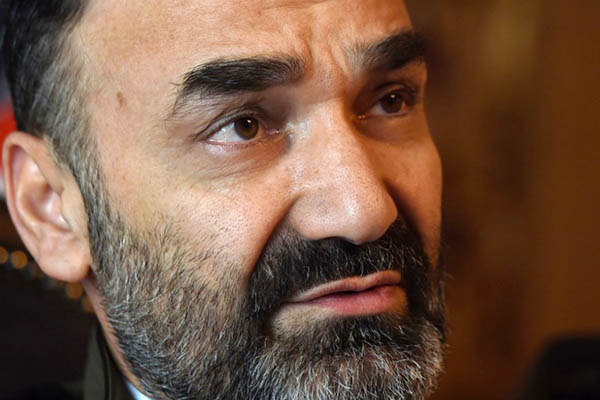 A powerful former Afghan governor at the center of a growing political crisis over his refusal to stand down permitted his appointed successor on Tuesday to set foot in his province for a funeral, sources have told AFP.

It is the first time Mohammad Daud has publicly visited Balkh since President Ashraf Ghani’s office announced on Dec. 18 that he would replace Atta Mohammad Noor as governor of the northern province.

Noor, nicknamed “King of the North,” has refused to leave the post he has held since 2004, rejecting a claim by Ghani’s office that he had resigned and throwing up a challenge to the president’s authority. The tussle with Noor—which many fear could turn violent—comes at a bad time for Ghani, whose government faces a deteriorating security situation with the Taliban and the Islamic State group stepping up attacks in recent months.

The crisis in Balkh has caused concern in Washington as well, and was on the agenda during a phone call between Vice President Mike Pence and President Ghani on Tuesday. “The Vice President emphasized his support for the Afghan government to engage with Balkh Governor Atta and conduct a peacefully negotiated transition of leadership,” said a readout of the call released by the White House.

Afghan and Western sources told AFP that Daud flew from Kabul, where he has been working during the dispute, to the provincial capital Mazar-i-Sharif to attend his father’s funeral after Ghani’s office struck a deal with Noor. Under the agreement, Daud will return to the Afghan capital after the ceremony, highlighting the enormous power Noor still wields despite being officially stripped of his position.

Daud exited the airport near Mazar-i-Sharif surrounded by heavy security before and was whisked away in an armored SUV on Tuesday, an AFP reporter said.

For the past month, Noor has made almost daily speeches to hundreds of supporters that have been broadcast live on television, highlighting the intense interest in the stand-off between the strongman and the president. His Jamiat-e-Islami party—dominated by ethnic Tajiks—has been locked in negotiations with the presidential palace as the government tries to end the dispute peacefully and avoid an outbreak of violence.

“I am the governor and will remain so unless there is an agreement reached in the ongoing talks between Jamiat and the Arg [presidential palace]. I will agree to the decision by Jamiat,” Noor said defiantly on Tuesday.

One of his close aides told AFP that Daud was allowed to have three bodyguards during his visit to Mazar-i-Sharif and could remain in the city as a private citizen. If the appointed governor engaged in any political activity, he would have to leave.

Noor has hinted that he may run for the presidency in Afghanistan’s next election, expected in 2019.

While President Ghani, an ethnic Pashtun, has not yet confirmed if he will run again, Western diplomats say he is trying to weaken or remove potential rivals ahead of the poll. “Ghani believes the days of the warlords are over… [and] is trying to make an example of him [Noor],” a Western diplomat told AFP recently.

Noor has long been a thorn in the side of Ghani. He recently called for the return of Vice President Abdul Rashid Dostum, a powerful ethnic Uzbek warlord who fled to Turkey in May after he was accused of arranging the rape and torture of a political rival in 2016. Dostum has denied the allegations.

Tensions between Afghanistan’s ethnic groups can often dominate the country’s politics. Last year, Noor met the country’s deputy chief executive Mohammad Mohaqiq, a senior figure in the mainly Shia Hazara ethnic community, as well as Dostum in Turkey to form the “Coalition for the Salvation of Afghanistan.”