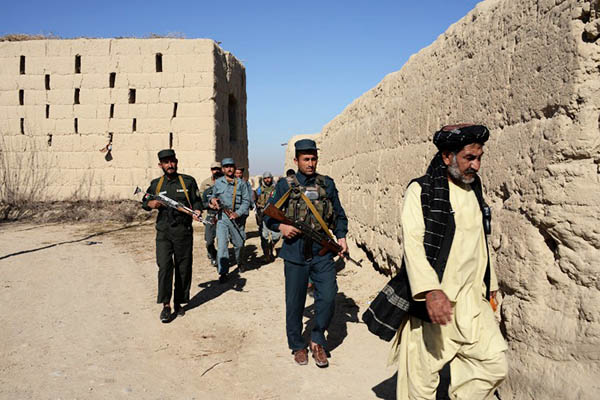 A captured Taliban rifle dangling at his side, commander Sultan Mohammed swaggers through a bomb-cratered district that was once a hornet’s nest of insurgents, symbolizing a rare Afghan military triumph where U.S. forces failed.

Panjwai was one of the centerpieces of U.S. President Barack Obama’s 2009 troop surge ambitiously aimed at crushing the Taliban, but the southern district soon became a poster child of the failed intervention. Strongmen including Mohammed, the Panjwai police chief with a reputation for brutality, in recent years did what the Americans could not—tame the insurgent haven that had come to be known as the “blood fountain.”

The Taliban are now out of sight in the district in Kandahar, pomegranate orchards stand on fields once awash with landmines, and poppy farms that boosted militant coffers are just a memory.

“When US forces were here, the Taliban were within one kilometer of their bases. Now they aren’t even within 100 kilometers,” Mohammed claimed, trailed by armed loyalists. “We did what American soldiers could not—rid the area of the Taliban.”

To get a full measure of the turnaround, juxtapose Panjwai against the turmoil convulsing the wider region, increasingly drawing NATO troops back into the conflict a year after their combat mission ended.

Neighboring opium-rich Helmand, Afghanistan’s largest province, is teetering on the brink of collapse. Overstretched Afghan troops are retreating from volatile southern districts, ceding swathes of key areas to the Taliban. And conflict-induced displacement is edging towards a new record as the Taliban now control more territory than in any year since 2001.

Panjwai offers a striking contrast: children in schools learning algebra instead of a Taliban curriculum, grape farmers tending their vines even after sundown, and once-wary visitors jaunting around on pheasant-hunting trips.

The transformation of Panjwai, birthplace of the Taliban movement, defies the common perception that Afghan security forces—deviled by high casualties and desertions—cannot stand alone without NATO backing. To its advantage, observers say Panjwai is not a messy froth of tribal and economic dynamics. And unlike neighboring districts gripped by violence, it does not fall on a major drug trafficking route.

“Being a backwater has helped Panjwai achieve detente that has seen many local insurgent fighters return to farming,” a Kabul-based Western official told AFP.

But the turnaround is also widely credited to anti-Taliban strongmen such as General Abdul Raziq, Kandahar’s powerful police chief who controls the province with an iron hand and is accused of running secret torture chambers, an allegation he denies. “His brief to his men is simple: ‘Don’t bring the enemy alive’,” said an official close to Raziq.

Last week the interior ministry said it was probing a graphic video apparently showing Mohammed’s men abusing an alleged suicide bomber. His hands bound to a police vehicle, the viral video shows the man being dragged along the road before a mob turns on him and one officer tries to bite the flesh off his arm.

To the supporters of Raziq and Mohammed, such savagery has made them a bulwark against the stubborn insurgency, more vital than ever as Afghanistan spirals into chaos. But their success is spawning ever more brutality.

“If I catch a Taliban supporter planting a landmine, I will make him sit on it and blow him up,” said Serajuddin Afghanmal, a police official credited for clearing thousands of mines in Panjwai.

Under the Americans, Panjwai was so heavily riddled with underground bombs that it was commonly joked the district grows mines more than pomegranates, grapes and tomatoes. When Obama’s 30,000-strong troop surge ended in 2012, the district was ranked by the U.S. Pentagon among Afghanistan’s 10 most dangerous districts.

U.S. forces showered Panjwai with aid money but calm could not be purchased. Rabid dogs now occupy some of the clinics they built. “The Americans thought they could restore security by floating balloons [surveillance blimps] in the air,” said Haji Mohammad, a policeman at an abandoned U.S. base in Panjwai. “But the insurgents were able to plant mines next to their bases. Whenever they stepped out their armored cars turned into coffins.”

He said local residents fumed when U.S. soldiers entered homes and mosques, affronting cultural sensitivities, and razed orchards that blocked the view from their spy balloons.

In 2012 Robert Bales, a battle-jaded American soldier, massacred 16 civilians in Panjwai in a rampage seen as the worst American wartime atrocity in decades, further aggravating anti-U.S. sentiment. Analysts warn Panjwai’s gains are at risk of unraveling as forced eradication of poppy crops creates economic hardship and as violence spills over from neighboring Helmand.

But, says Mohammed the police chief, the battle for Panjwai was won on the day the last U.S. soldiers pulled out. “With the Americans gone, the Taliban have no moral justification to be here,” he said, clasping an M4 assault rifle snatched from the insurgents, now his personal weapon. “Foreigners can prop us up with weapons but they don’t belong here. Only Afghans can really win Afghanistan’s war.”