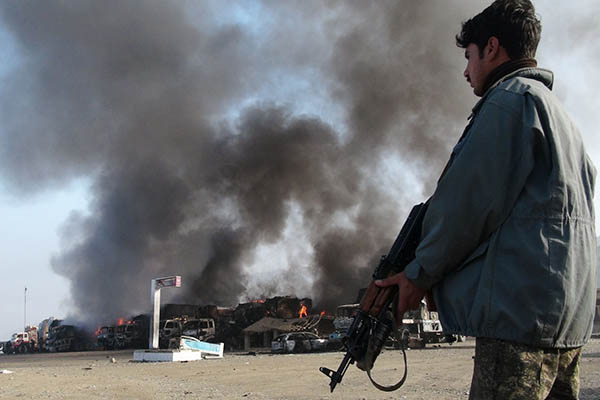 All attackers killed after three-hour fight with security forces.

The attackers detonated a car bomb outside the entrance to the facility at Torkham gate, a key crossing into Pakistan for NATO supplies leaving Afghanistan as the U.S.-led coalition withdraws.

“During the three-hour fight with security forces, one policeman was killed, five wounded. Several vehicles were torched,” said Nangarhar provincial spokesman Ahmad Zia Abdulzai. “All attackers, who had military uniforms on, were killed.” The parking lot was run by a private company and used by the U.S. military for vehicles waiting to exit Afghanistan, he said.

A Taliban statement said their fighters had torched more than 30 U.S. military vehicles on Wednesday. Militants on both sides of the Afghan border frequently target NATO supply lines, forcing NATO to shift toward alternative routes via Central Asian countries.

The attack came a day after six U.S. troops were killed and one wounded in a helicopter crash in southern Afghanistan. NATO said there was no militant activity in the area of the crash, but the Taliban, who are waging a 12-year-long insurgency to topple the U.S.-backed Afghan government, said they had shot down the helicopter.