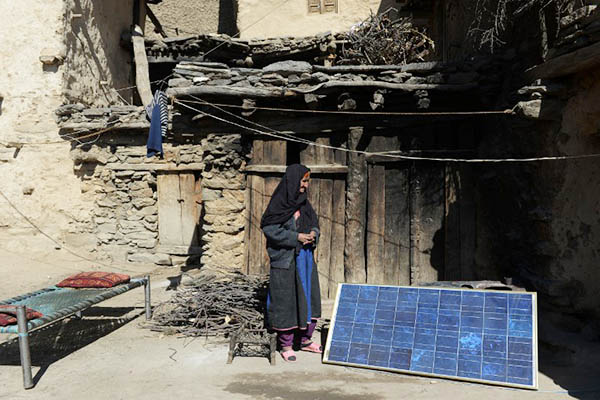 Women, children forced to fend for themselves after losing primary breadwinners to Taliban assaults

Widowed Afghan grandmother Janat Bibi has no adult males left in her family after the Taliban killed her son and two grandsons during an attack on their police base a few months ago.

Such bereavements are often a double tragedy for an increasing number of poverty-stricken families like hers in Afghanistan—they have lost not only a loved one, but also their main income earner.

Bibi and the men’s widows now battle to support 12 children in a remote village in the eastern province of Nangarhar where there are few jobs for men, let alone for women.

“We have not received any help from the government since I lost my son and grandsons. They were the only breadwinners of this big family,” the 65-year-old told AFP as she sat crying in her stone and mud house in Shemol.

Bibi, who was widowed during the Soviet occupation of Afghanistan in the 1980s, said she had supported the men’s decision to join the police in the restive southeastern province of Zabul despite the risks.

Afghan security forces are facing soaring casualties as they struggle to beat back the Taliban—but the combined monthly salary of 36,000 afghanis was more than her relatives could hope to earn in Shemol. The loss of their fathers’ incomes means the children have to work alongside their mothers in nearby fields to help eke out a meager living for the family, instead of attending the local outdoor school.

Their plight is shared by others in the 4,500-strong village where around 900 men, or 20 percent of the population, have joined the security forces. “Casualties are on the rise,” provincial council member Amir Mohammad told AFP noting dozens of bodies had been brought back to the village in recent months.

Many of Afghanistan’s more than 330,000-strong security forces come from villages much like Shemol, which is some 70 kilometers from the provincial capital Jalalabad. With economic prospects bleak in the war-torn country, men like Bibi’s relatives often join in a gamble they will survive to support their families.

But casualty rates have leapt since NATO pulled its combat forces out of Afghanistan since 2014. More than 2,500 Afghan security forces were killed in the first four months of this year alone, according to US watchdog SIGAR. The soaring deaths leave more and more widows particularly vulnerable in the male-dominated country, where they are often regarded as a burden and subjected to violence.

Mostly illiterate and with little or no experience of working outside the home, they have few options to earn money if their husbands die. While widows of security forces killed in action are entitled to receive their husband’s salary until they remarry or their children turn 18, many women do not know how to access the financial benefits, a U.N. report has said.

The widows are required to submit documents to the authorities proving their connection to the dead soldier or policeman, according to the labor and social affairs ministry. “The survivors have to come to us,” ministry spokesman Abdul Fatah Ahmadzai told AFP, adding: “Nobody is left out.”

But Help for Afghan Heroes, an Afghan non-profit organization supporting 5,000 families of wounded or dead security forces, said corruption was a key reason many women did not receive assistance. “They are asked to pay a bribe to get the application [for benefits] processed and they often don’t have the money,” Nasreen Sharar, special projects officer for the group, told AFP.

The family of Malekzada, who was also a policeman in Zabul until he was killed by the Taliban two years ago, find themselves in the same plight as Bibi’s. The 27-year-old man left behind a wife, elderly mother and two children in Shemol who are now struggling to earn enough money for food.

“We lost our only breadwinner two years ago,” the elderly mother told AFP. “Every day from dawn to dusk we work for landlords cleaning grain. We have received no assistance from anyone since I lost my son. Life is really difficult for us.”

Bibi said her male relatives had joined the police “to make some money and serve their country”—but her family has not even received official acknowledgement of their service, much less financial aid. Now, she says, “we hardly make ends meet.”

Given the economic prospects in the war-torn country, there appears to be only one way out—by perpetuating the cycle. “Although they are dead I don’t regret the decision. I will even send my grandchildren to become police and defend our country,” Bibi said.