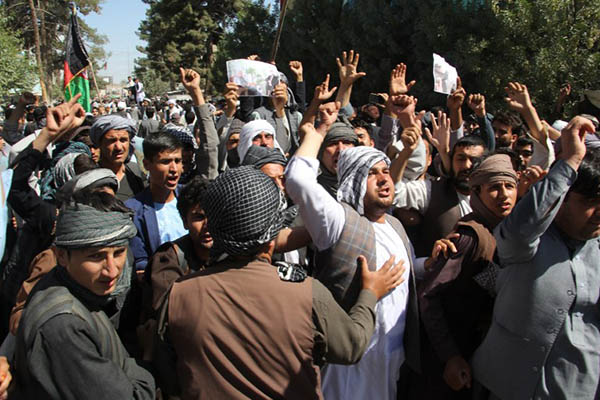 The arrest of a powerful warlord in northern Afghanistan sparked violent protests on Wednesday that officials said left at least one person dead and several wounded.

Thousands of demonstrators took to the streets of Maimanah, the capital of Faryab province, for a second day to demand the release of Nezamuddin Qaisari, a commander of a pro-government militia and a district police chief.

Qaisari was arrested Monday after he allegedly threatened to kill people at a provincial security meeting. Qaisari “insulted all the participants of the meeting, calling them traitors and also threatening to kill them all,” according to a statement issued by Shaheen 209 Corps, which hosted the meeting.

Qaisari is also the provincial representative of fellow ethnic Uzbek warlord, Afghan Vice President Abdul Rashid Dostum, who fled to Turkey last year after he was accused of being involved in the rape and torture of a political rival.

“We want the government to pave the way for General Dostum’s return and release Qaisari,” protester Atta Mohammad Faizi told AFP. “We wanted to peacefully protest and present our demands but the security forces opened fire at us. One protester was killed and 10 were wounded.”

Enayatullah Babur Farahmand, another protester, said Qaisari’s bodyguards were killed during Monday’s meeting and the commander had been taken to the Afghan capital Kabul. “We will continue our protest until he is released, even if they kill our last man,” Farahmand told AFP.

Qasim Parsa, a doctor in Maimanah, told AFP that one body and nine wounded had been brought to his hospital.

Protesters chanting “Death to [President Ashraf] Ghani and the government” marched on the streets, setting fire to vehicles and parts of the governor’s compound. Faryab currently does not have a governor.

Dostum, who has been living in Turkey since May 2016, warned the removal of Qaisari could worsen insecurity in Faryab where pro-government militias and security forces are fighting the Taliban and Islamic State group. “The danger of chaos and collapse in the ranks of defending forces in Faryab exists,” Dostum said in a statement posted on his spokesman’s Facebook page.

Dostum, who has been linked to multiple human rights abuses, has not been prosecuted over the alleged abduction and sodomy of Ahmad Ishchi, a former governor of northern Jowzjan province. He has denied the accusations. Seven of his bodyguards were convicted last year over the incident and sentenced to five years in jail.