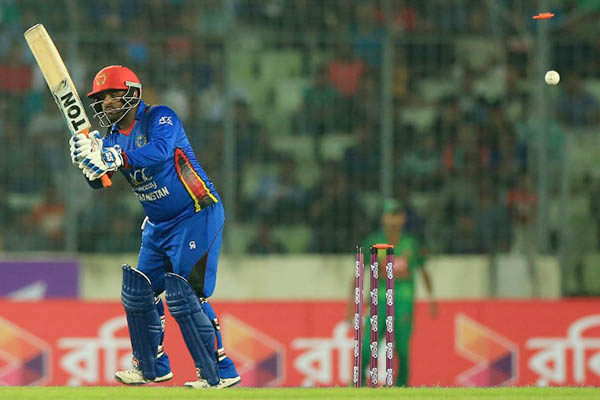 Mohammad Shahzad ordered to pay 300,000 Afghanis for not obtaining permission prior to playing in Peshawar tournament

Afghanistan wicketkeeper Mohammad Shahzad has been fined after he was caught playing for a Pakistani cricket club without permission, an Afghan official said on Monday.

Shahzad has been ordered to pay 300,000 Afghanis (about $4,400) and return to Afghanistan after taking part in a local tournament in Peshawar.

The 30-year-old went to Pakistan after Afghanistan returned from Zimbabwe last month following their qualification for the 2019 World Cup, Lutfullah Stanikzai, head of media and marketing for the Afghanistan Cricket Board (ACB), told AFP. Rules require players to obtain a “no objection certificate” if they want to play matches other than those approved by the ACB.

This is not the first time that Shahzad has fallen foul of regulations. He was suspended for two matches in Zimbabwe for slamming his bat on the pitch after being dismissed in a qualifying match.

That incident came three months after the big-hitter returned from a one-year doping ban.

Shahzad will still go to India for a training camp before Afghanistan’s series against Bangladesh and a Test match against India in June, Stanikzai said. “If this is repeated again, next time he might be banned from playing cricket,” Stanikzai added.

The ACB has also ordered players living abroad, mainly in Pakistan, to return to Afghanistan if they want to continue playing for the national side. “We have a strong structure for our domestic cricket so we do not see the need for people to go and play for clubs outside Afghanistan,” Stanikzai said. “There’s plenty of cricket that’s happening here now.”