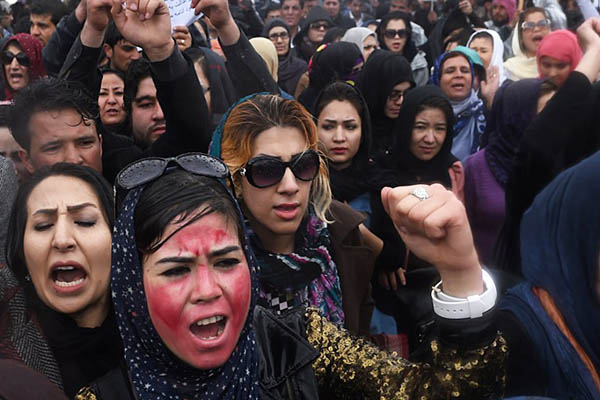 Interior minister says the allegations were completely false, as protesters march for justice.

An Afghan woman who was beaten to death and set on fire by a mob for allegedly burning a copy of the Quran was “innocent,” the interior minister said Monday.

The woman, named Farkhunda, was lynched on Thursday by an angry crowd in central Kabul for allegedly burning a copy of the Islamic holy book. “The accusation against her is completely invalid. Farkhunda was a religious girl, she was not involved [in burning the Quran], she was innocent,” interior minister Noorulhaq Ulumi told M.P.s during questioning in parliament. “It is very painful that we were not able to protect a pious young person. We hope this will not be repeated again.”

Footage of the attack on social media shows several uniformed police watching as the crowd beat 27-year-old Farkhunda to death before burning her body, then dumping it into the Kabul river. In a statement on Sunday the interior ministry said 13 police officers had been suspended, including the police chief responsible for the area. More than a dozen other people were arrested over the incident.

Scores of people protested against the lynching in Kabul on Monday, demanding the government bring the killers to justice. The protesters marched in front of the mosque and along the river near where Farkhunda was beaten to death.

“We ask the government to detain and bring to justice every individual who was involved in the murder of Farkhunda,” said protester Maliha Akhawan. Many women in the crowd wore masks bearing an image of Farkhunda’s bloodied face that has been circulated on social media.

Farkhunda’s body was carried to the graveyard by women amid crowds of men and laid to rest in Kabul on Sunday. Her father has said his daughter had a diploma in Islamic studies and could recite the Quran by heart, insisting she was not involved in burning the holy book.

Allegations of Quran burnings have sparked violent incidents before in Afghanistan. In 2012 the revelation that copies of the Quran had been burnt at the U.S.-run Bagram prison sparked five days of violent anti-U.S. riots and attacks across the country, in which 30 people died.