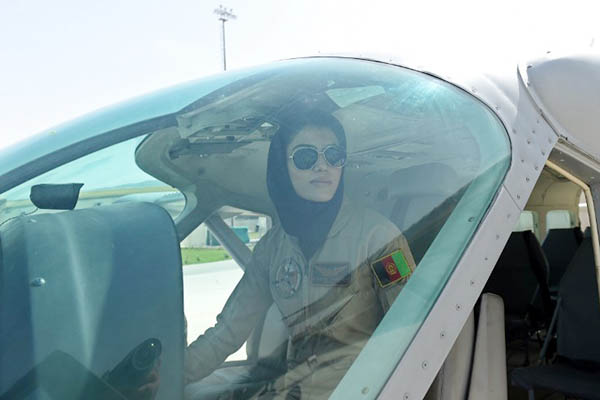 Activists support 25-year-old, as critics brand her ‘traitor’ for refusing to return to her homeland.

The shock announcement of Afghanistan’s first woman fixed-wing pilot to seek asylum in the U.S. has touched off a spirited national debate on the country’s most vexing issues: insecurity, women’s rights and mass exodus of young people.

Niloofar Rahmani, a 25-year-old pilot lionized widely as the “Afghan Top Gun” after the 1986 Tom Cruise film on flying aces, was scheduled to return to Afghanistan last week after a 15-month training course with the U.S. air force. But on the eve of her departure, she declared she would not be returning citing fears for her safety, triggering a storm of criticism in Afghanistan for “betraying” her nation but also garnering support from activists.

“What she said in the U.S. was irresponsible and unexpected. She was meant to be a role model for other young Afghans,” defense ministry spokesman Mohammad Radmanesh told AFP on Monday. “She has betrayed her country. It is a shame.”

Rahmani became a symbol of hope for millions of Afghan women when she surfaced in the press in 2013 after becoming Afghanistan’s first woman pilot since the Taliban era, dressed in tan combat boots, khaki overalls and aviator glasses. The once-unimaginable feat last year won her the U.S. State Department’s “Women of Courage Award.”

But with fame came death threats from insurgents and she routinely faced contempt from her male colleagues in a conservative nation where many still believe that a woman does not belong outside the home.

In an interview with AFP in Kabul last year, Rahmani said she always carried a pistol for her protection and though she has grown accustomed to the ogling eyes of men, she never left her airbase in uniform, lest it make her a target.

Rahmani’s lawyer Kimberly Motley said her decision to seek asylum in the U.S. had been a “heartbreakingly difficult decision.”

“Niloofar and her family have received vicious threats which have unfortunately confirmed that her safety is at significant risk if she were to come back to Afghanistan,” Motley told AFP. “The real betrayal to Afghanistan is against those who threaten her life, her family’s life, and also to those who continue to oppress women.”

But some of the most virulent criticism over her decision has come from women.

“Dear Niloofar, do you think your problems are bigger than that of millions of other Afghan women?” photojournalist Maryam Khamosh wrote on Facebook. “I sometimes wish I were Niloofar and could soar in the sky and bomb the enemies of my people. But you, Niloofar, who touched the skies from the ashes of our land have shamed our flag.”

NATO forces also took umbrage at her media comment that the security situation in Afghanistan is “getting worse and worse.”

“Afghan security forces have seen definitive progress… and their performance in 2016 was better than 2015, and we expect 2017 to be better than 2016,” the military coalition said. But that sentiment hardly resonates with the Afghan youth, who have continued to flee the country’s escalating conflict in record numbers.

On Monday many Afghans decried another symbol of violence and impunity—social media images of dreaded warlord Faryadi Sarwar Zardad relaxing in a public bathhouse. Infamous for once keeping a “human dog” that savaged victims on his command, Zardad was unexpectedly deported from Britain this month following his early release from jail.

“When someone like Zardad can roam freely in Kabul then Niloofar has the right to not come back,” said an Afghan man on Facebook.