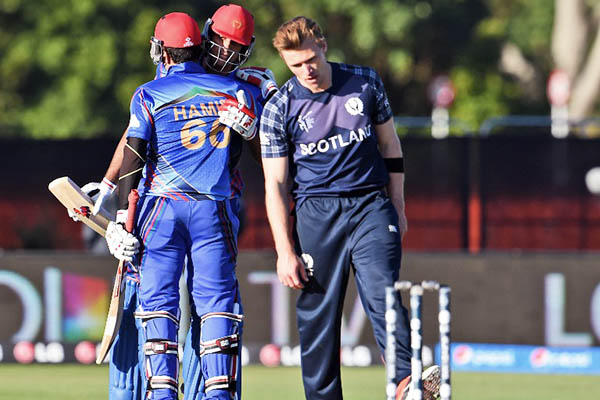 Samiullah Shenwari scored 96 after team was floundering with 97/7.

Afghanistan posted their first-ever victory at the World Cup on Thursday with a nail biting one-wicket win over Scotland in Dunedin on Thursday.

Afghanistan chased down their target of 211 with just three balls to spare, bringing up a remarkable win for the minnows, appearing in their first World Cup. Samiullah Shenwari who like many of the Afghan players learned his cricket in refugee camps in Pakistan after fleeing civil strife back home, rescued the side with a defiant 96 after they had collapsed to 97 for seven.

Javed Ahmadi contributed 51, while tail-ender Shapoor Zadran scored the winning runs, courtesy of a last-over boundary off Scotland paceman Iain Wardlaw. Shapoor, who had earlier excelled with the ball, fell face down on the ground with relief after seeing Afghanistan home as the gutted Scots looked on.

The loss left Scotland still seeking a first win at a World Cup, with their overall record now standing at 11 defeats from as many matches over three campaigns at the tournament. The Scots were all out for 210 off the final ball of their allotted 50 overs at Dunedin’s University Oval after losing the toss and being sent into bat in this Pool A clash.

Afghanistan’s decision to bowl first paid dividends on a green wicket as left-arm paceman Shapoor took four for 38 in his maximum permitted 10 overs. But a 62-run stand for the ninth wicket took Scotland past 200 for the first time at a World Cup to provide a defendable total for their bowlers. Several of the Scottish batsmen made starts but could not convert them in the face of Afghanistan’s spirited bowling effort.

The Afghans made a strong start to their chase, with opening batsman Ahmadi notching his fifth one-day international half century off 48 balls. Ahmadi’s knock had Afghanistan at 85 for two after 18 overs, putting them into a good position for an all-out assault late in the innings.

But his departure sparked a dramatic collapse, with Mohammed Nabi gone two balls later followed by a first-ball duck for Afsar Zazai. It could have been worse for Afghanistan, with Shenwari dropped on 20 by Majid Haq in the slips.

Haq soon made amends for his mistake, catching Najibullah Zadran and Gulbadin Naib in quick succession to leave Afghanistan teetering on 97 for seven. But Shenwari made the most of his reprieve and kept the innings alive, working with the tail to patiently graft a Test-like innings of 96 from 147 balls.

When he finally decided to unload, Shenwari plundered three sixes off a single Haq over but was caught on the boundary going for a fourth. That left Afghanistan needing 19 off 19 balls from the unlikely pair of Shapoor and Hamid Hassan. Shapoor capitalized after Richie Berrington delivered a wide in the penultimate over, hitting a boundary off the extra delivery.

The paceman, who had only struck five boundaries in 32 previous ODIs, then managed to clip Wardlaw’s third delivery of the last over through the leg side to secure the most famous victory in Afghanistan’s short cricketing history.