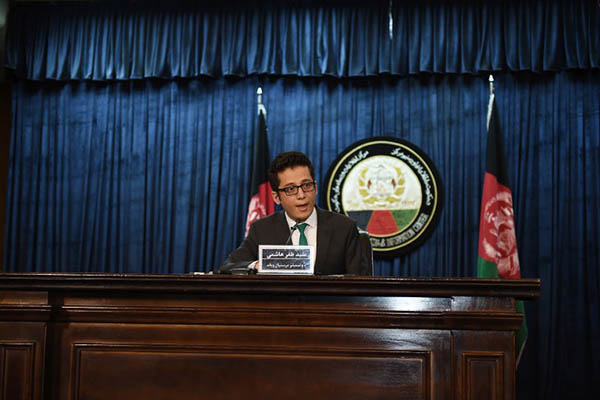 The insurgents have not officially confirmed the death of their spiritual leader, who has not been seen publicly since the 2001 U.S.-led invasion of Afghanistan that toppled the Taliban government in Kabul. Rumors of Omar’s ill-health and even death have regularly surfaced in the past, but the latest claims—just two days before fresh peace talks with the insurgents—mark the first such confirmation from the Afghan government.

“The government of the Islamic Republic of Afghanistan, based on credible information, confirms that Mullah Mohammad Omar, leader of the Taliban died in April 2013 in Pakistan,” a statement from the presidential palace said. The White House added weight to the assertion, calling reports of his demise “credible”, though it refused to be drawn on the timing and location of his death.

Haseeb Sediqi, the spokesman for Afghanistan’s National Directorate of Security, told AFP that Omar died in a Karachi hospital “under mysterious circumstances.”

Omar’s death would mark a significant blow to an almost 14-year Taliban insurgency, which is riven by internal divisions and threatened by the rise of the Islamic State group in South Asia. The announcement also cast doubt over the second round of negotiations between the insurgents and the Afghan government, which are expected to take place in Pakistan on Friday.

“Certainly this news will affect the talks,” said Rahimullah Yousufzai, a Pakistan-based expert on Afghan affairs. “If their most important leader is dead, differences will emerge within the [Taliban] over talks.”

The Taliban appear to be maintaining a studied silence, but the Afghan presidential statement said grounds for the discussions are more solid now than before, and implored all insurgents to join the peace process.

Confirmation of Omar’s death could trigger a power struggle within the Taliban, observers say, with insurgent sources claiming his son Mohammad Yakoub and current deputy Mullah Mansour are both top contenders to replace him.

Wednesday’s official announcement comes after unnamed government and militant sources told media, including AFP, the one-eyed leader died two or three years ago—and after the Afghan government said it was investigating reports of his death.

“We can confirm that Mullah Omar died two years ago… in Pakistan due to an illness,” a senior official in Afghanistan’s national unity government told AFP earlier. “He was buried in Zabul province [in southern Afghanistan],” said the official, citing Afghan intelligence sources.

The insurgents in April published a descriptive biography of the “charismatic” supreme leader in a surprise move apparently aimed at countering the creeping influence of the Islamic State group within their ranks. The Taliban have reportedly seen defections to I.S. in recent months, with some members expressing disaffection with their low-profile chief. The biography, posted on the Taliban’s official website to commemorate Omar’s apparent 19th year as supreme leader, tried to dispel speculation he had died by describing him as actively involved in “jihadi activities.”

And earlier this month in a message released in his name, the leader was quoted as hailing the peace process as “legitimate.” The comments, the first reputedly made by Omar on the nascent dialogue, eased concerns at the time that the process lacked the leadership’s backing.

But a member of the Quetta shura, the Taliban’s governing council, voiced doubt over whether that message—released just before Eid ul-Fitr—was from Mullah Omar himself. “For the last few years he has not attended any big gathering, neither has he sent any audio message to his followers,” the member, who requested anonymity, told AFP on Wednesday. “That gives us reason to believe that he has died.”

Waheed Muzhda, a Kabul-based analyst who served in the 1996-2001 Taliban regime’s foreign ministry, said any confirmation of his death from the militants would bode ill for the unity of their movement. “It would mean that messages sent out in the name of Mullah Omar in the last two years were all lies and deception,” Muzhda told AFP.

Afghan officials sat down with Taliban cadres earlier this month in Murree for their first face-to-face talks aimed at ending the bloody insurgency. They agreed to meet again in the coming weeks, drawing international praise, but many ground commanders openly questioned the legitimacy of the Taliban negotiators, exposing dangerous faultlines within the movement.

Afghan officials have pledged to press for a ceasefire in the second round of talks, scheduled for Friday.

The split within the Taliban over the peace process has been worsened by the emergence of a local branch of I.S., the Middle Eastern jihadist outfit that last year declared a “caliphate” across large areas of Iraq and Syria that it controls. The Taliban warned I.S. recently against expanding in the region, but this has not stopped some fighters, inspired by the group’s success, defecting to swear allegiance to I.S. chief Abu Bakr al-Baghdadi instead of the invisible Mullah Omar.