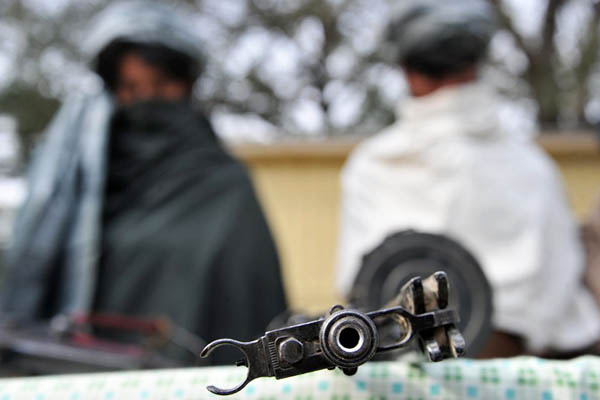 National Security Council claims attack was too ‘complex’ to be perpetrated by ordinary Taliban.

Afghanistan’s National Security Council, which is chaired by President Hamid Karzai, on Sunday accused “foreign intelligence services” of being behind the deadly attack on a Kabul restaurant, in a veiled reference to Pakistan.

Pakistan was the main supporter of the former Taliban regime in Afghanistan, and Afghan officials have long voiced suspicions about connections between the hardline movement and Islamabad’s intelligence services.

“The NSC said such sophisticated and complex attacks are not the work of the ordinary Taliban, and said without doubt foreign intelligence services beyond the border are behind such bloody attacks,” a statement from the palace said.

“Beyond the border” is a phrase commonly used by the Afghan government to refer to neighboring Pakistan. Taliban insurgents claimed responsibility for Friday evening’s suicide assault on a popular Lebanese restaurant in central Kabul in which 21 people, including 13 foreigners, were killed.

Among the dead were three Americans, two British citizens, two Canadians, the International Monetary Fund head of mission, and the Lebanese owner of the Taverna du Liban, which was a popular social venue for expats.

In the deadliest attack on foreign civilians since the Taliban were ousted in 2001, one attacker detonated his suicide vest at the fortified entrance to the restaurant before two other militants stormed inside and gunned down diners and staff.

The accusation of Pakistani involvement is likely to damage regional peace efforts as Pakistan, which is battling its own homegrown Taliban insurgency, is seen as crucial to encouraging the Afghan Taliban to open talks.

Many Afghan Taliban leaders seek shelter in Pakistan, and Islamabad’s Inter-Services Intelligence (ISI) spy agency is often accused of maintaining ties to the militants to ensure future influence in Afghanistan after U.S.-led NATO troops withdraw. Pakistani officials were not immediately available to comment on the accusations from Kabul, but Islamabad has always denied any links with the Taliban.

President Karzai earlier condemned the restaurant attack and called on NATO forces “to target terrorism” in his country. Afghan officials on Sunday vowed to investigate how the suicide attackers penetrated one of the most secure parts of Kabul. A series of checkpoints known as the “ring of steel” was established in 2009 after repeated attacks in central Kabul, but the militants evaded armed police tasked with searching people and vehicles.

Three police chiefs responsible for the Wazir Akbar Khan district have been suspended over the security breach. “The police officers will be questioned to see how this attack happened,” said interior ministry spokesman Sediq Sediqqi at a rally of about 100 protesters outside the targeted restaurant. The demonstrators, holding signs reading “We denounce terrorism,” had gathered to protest against the Taliban insurgency that opposes the U.S.-backed Kabul government.

United Nations leader Ban Ki-moon paid tribute to the four U.N. staff killed in the attack, and pledged the U.N. would maintain its work in Afghanistan. “This is totally unacceptable and this is a violation of international humanitarian law. All the perpetrators must be held accountable,” the secretary general said. “As the United Nations mourns this terrorist attack and its victims, we remain committed to work for the peace, stability and development of Afghanistan.”

The blast has led to embassies, aid organizations and international institutions re-assessing whether their staff can operate safely in Kabul. “This was an attack on foreign civilians targeted merely for being foreign—a rare occasion in this Afghan war,” said the Afghanistan Analysts Network in a report released on Sunday.