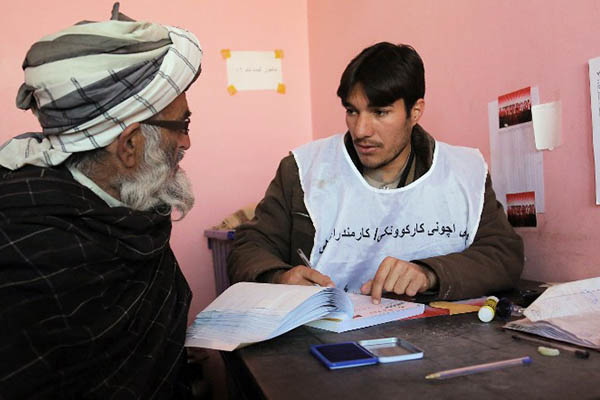 Registering to vote in the upcoming presidential elections. Rahmatullah Alizada—AFP

Afghanistan’s election campaign kicks off on Sunday, with 11 candidates vying to succeed President Hamid Karzai as the country enters an uncertain new era without the aid of NATO combat troops to fight the Taliban.

A dispute between Kabul and Washington over whether a small force of U.S. soldiers stays beyond 2014 is likely to dominate the two-month campaign, which will culminate in Afghanistan’s first-ever democratic transfer of power.

Karzai has ruled the country since the fall of the Taliban in 2001, surviving assassination attempts and the treacherous currents of Afghan political life as billions of dollars of military and development aid poured into the country. He is barred from seeking a third term, leaving an open field to compete in the April 5 vote, which is likely to trigger a second-round run-off in late May between the two strongest candidates.

Tipped to go through to the run-off stage is Abdullah Abdullah, the suave opposition leader who came second to Karzai in the chaotic and fraud-riddled 2009 election. Among the other heavyweight candidates are former finance minister Ashraf Ghani, Karzai loyalist Zalmai Rassoul and the president’s low-profile elder brother Qayum Karzai.

Afghan politics has been focused for months on the bilateral security agreement (BSA), which would allow about 10,000 U.S. troops to be deployed in the country after NATO withdraws by December. Karzai was expected to sign the deal late last year, but he has stalled and said his successor might now complete negotiations—plunging relations with the U.S., Afghanistan’s key donor, to a fresh low.

U.S. Defense Secretary Chuck Hagel said Karzai’s foot-dragging risked leaving Washington no time to plan its post-combat mission. “You can’t just keep deferring and deferring because at some point the realities of planning and budgeting collide,” the Pentagon chief told reporters on Thursday. But U.S. officials concede that they are waiting for a change at the top. Karzai “is the elected president of a sovereign nation, and our ability to influence whatever decisions he makes is limited,” Hagel said.

Western and Afghan officials say all 11 candidates support the BSA but, except for Abdullah Abdullah, they have declined to say so publicly for fear of clashing with Karzai.

“It is in the interest of Afghanistan to sign the BSA,” Abdullah said this week. “It is better (if) candidates have the courage to talk on behalf of their own people regardless of who is upset. This issue has left Afghan people worried when they want a good election and for a new administration to come in as a result of a good nationwide campaign.”

Taliban insurgents have threatened to target the campaign, and the Afghan police and army face a major challenge with little support from the dwindling number of NATO troops. The interior ministry hopes to open 6,431 of 6,845 polling centers, though fear of insurgent violence could keep turnout low.

Only about one-third of registered voters cast their ballots last time—significantly lower than previous elections—and the turnout may decline further. Debate on policy and economics is set to take a back seat to ethnic and tribal loyalties, with runners picking vice-presidential candidates to widen their appeal.

Karzai has vowed to not officially endorse anyone, but several still hope for his covert backing, and the outgoing president is expected to remain influential after stepping down from power.

The first visible sign of the election is likely to be candidates’ posters plastered on walls across the country, with relatively little action on the campaign trail until nearer the vote. Television debates and large open-air rallies are also planned, but no details have been confirmed.

Disputes over millions of fraudulent ballots led to a major crisis after voting in 2009, before Abdullah pulled out of the run-off, leaving Karzai to take power. Election organizers are again expected to be busy with complaints of fake votes, ballot box stuffing and polling booths unable to open due to intimidation.

“Holding elections is not an easy job in the current situation in Afghanistan,” Yousuf Nuristani, chairman of the Independent Election Commission, told candidates recently. “We hope you carry out your election campaigns in accordance to the law and in a good environment.”

The next president is likely to be inaugurated in July or August.