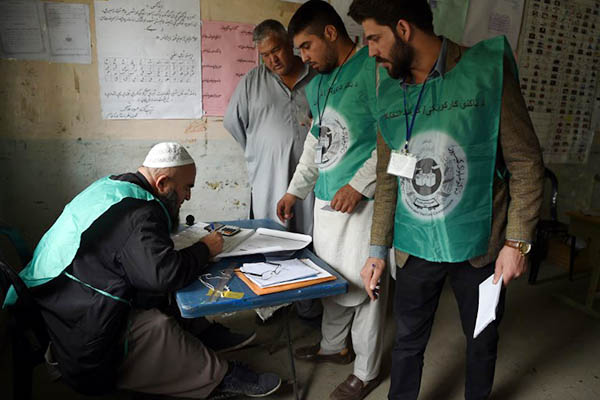 Afghanistan is airdropping leaflets as it steps up efforts to boost the low number of voter registrations for upcoming legislative elections, amid concerns that a poor turnout will undermine the credibility of the poll.

A series of attacks on voter registration centers across the war-torn country, including a suicide bomb in Kabul a week ago, has deterred many Afghans from signing up to participate in the Oct. 20 ballot.

Just over 650,000 adults had registered by Saturday, a fortnight after the two-month long process began, data compiled by the Independent Election Commission (IEC) showed. The IEC, which is overseeing preparations for the long-delayed parliamentary and district council vote, hopes to register up to 14 million adults at more than 7,000 polling centers.

But if the current trend were to continue, fewer than three million people would be registered by the mid-June deadline. “We are concerned about the low turnout,” IEC spokesman Shafi Jalali told AFP on Sunday, adding the process may be extended to lift numbers.

Authorities have deployed planes to drop leaflets in a number of provinces raising awareness about the elections, which are seen as a test run for next year’s presidential poll. A radio and television campaign is also under way and civil servants have been granted a day off to sign up.

The IEC has placed many of the voter registration centers inside schools and mosques, triggering concerns that students and worshippers could be at risk.

Last Sunday’s suicide attack outside a voter registration center in a heavily Shia-populated neighborhood of Kabul killed 60 people and wounded 129. It was very close to several schools.

Since then, thousands of parents in mainly Shia areas of the city have pulled their children out of schools with registration centers, several principals told AFP on the condition of anonymity. “Hundreds” had dropped out of classes at one high school of 7,000 students after the attack, the principal said. “The parents are coming every day to demand that we remove the registration site. We have submitted their request to the education department and are waiting for a reply,” she said.

An education ministry spokesman told AFP they were concerned about security of voter registration centers in schools, but had not received any complaints from parents or reports of falling attendance. “If there is any real threat facing our students or the continuation of lessons… we will no doubt take action,” spokesman Kabir Haqmal said.

In the eastern city of Jalalabad on Sunday an explosion about 100 meters from a mosque being used to register voters wounded five civilians, provincial governor spokesman Ataullah Khogyani told AFP.

Another hurdle to voter registration is a sticker placed on national identification certificates showing the holder has signed up for the poll. There are concerns that the stickers could put voters in restive districts at risk of being targeted by Taliban or Islamic State militants who have signaled they intend to disrupt the elections.