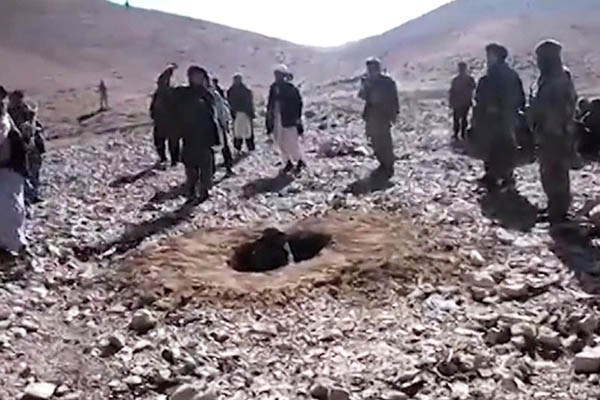 Footage shows girl being lowered into hole in the ground before being pelted to death by turbaned men.

Afghanistan’s president on Wednesday ordered a probe into the fatal stoning of a young woman in a Taliban-controlled area after she was accused of adultery, a savage punishment that sparked nationwide outrage.

The woman, identified as Rokhsana and believed to be aged between 19 and 21, had been forced to marry and was accused of adultery after she tried eloping with another man, officials said.

“President Ashraf Ghani calls the stoning of a girl in Ghor province extra-judicial, un-Islamic and criminal, condemning it in the strongest terms,” a statement from his office said. “The president assigns a delegation to seriously investigate this incident.”

Rokhsana was placed in a hole in the ground as turbaned men gathered around and hurled stones at her with chilling nonchalance, footage released by broadcaster Radio Free Europe / Radio Liberty showed. The woman was heard repeating the shahada, her voice growing increasingly high-pitched as stones struck her with sickening thuds.

Afghan officials said that the killing took place about a week ago in a Taliban-controlled area just outside Firozkoh, the capital of Ghor. Rokhshana was stoned by a gathering of “Taliban, local religious leaders and armed warlords,” Ghor’s Governor Seema Joyenda told AFP.

The man she was eloping with was let off with a lashing, her office said.

The brutal punishment meted out to Rokhshana highlighted the endemic violence against women in Afghan society, despite reforms since the hardline Taliban regime fell in 2001. In March a woman named Farkhunda was savagely beaten and set ablaze in central Kabul after being falsely accused of burning a Quran. The mob killing triggered protests around the country and drew global attention to the treatment of Afghan women.

Public lashings and executions were common under the Taliban’s 1996-2001 rule, when a strict interpretation of sharia law was enforced, but such incidents have been more rare in recent years.