Afghanistan, Pakistan Battle it Out on Football Field 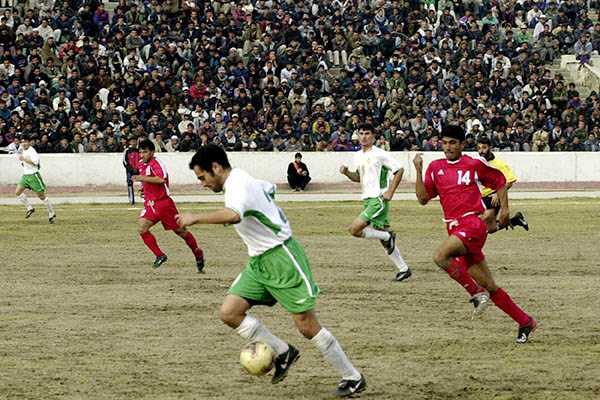 Turkmenistan takes on Afghanistan in a 2003 football match in Kabul. Shah Marai—AFP

First international match in Kabul in 10 years is expected to attract sell-out crowd.

Afghanistan’s action-starved football fans are predicting a morale-boosting victory for the national side in their first home game in 10 years when they take on Pakistan Tuesday.

The match at the Afghanistan Football Federation (AFF) stadium in Kabul has sparked major interest in the war-torn country, with a sell-out crowd expected at the afternoon game.

Afghanistan, ranked 139th in the world, last played at home in 2003 in a clash against Turkmenistan and have not played Pakistan, their eastern neighbor and rival, in Kabul since 1977.

“I’m very glad Afghanistan play Pakistan here,” said Ghulam Abbas Kohi, a 16-year-old student, as he picked up tickets from a sales booth in the city. “I don’t remember any other match like this in my whole life. I’m sure Afghanistan are going to score a dozen goals and win. We have a strong team. I have bought 10 tickets and I also have Afghanistan flags to wave. I’m very excited.”

The FIFA-sanctioned match is being promoted as an international friendly, but cross-border tensions between Afghanistan and Pakistan are likely to boost patriotic fervor on both sides.

Afghans and Pakistanis blame each other for violence plaguing both countries, with many in Afghanistan convinced that Pakistan is still pulling the strings behind a 12-year Taliban insurgency.

Pakistan was one of only three countries that recognized the 1996-2001 Taliban regime in Kabul until the hardline Islamists were defeated by a U.S.-led invasion for sheltering Al Qaeda after the 9/11 attacks.

“I am sure Afghanistan will win, and hope this victory will be a response to Pakistan’s interference in Afghanistan,” said Mohammad Ali, 20, as he picked up two $5 tickets. “I’m going with all my friends to this match to support our team. We need to win.”

But retired Afghan football hero Mohammad Saber Rohparwar said that the game should be a demonstration of unity between the two troubled nations.

“I hope it brings joy and hope to the people of both countries,” said the former national captain, who has returned to Kabul from his home in Germany for the match. “I don’t want to talk politics, but it appears politicians have failed in attempts to bring the two nations closer and help solve the problems shadowing our ties. I hope the game helps rebuild trust and strengthen good relations.”

He said he had returned to his homeland to give moral support and to help motivate the Afghan team. “I have already seen them in action and am happy to see they are strong, motivated and professional.”

Football chiefs in Pakistan, ranked 167th in the world, say the game will “create history” as the two sides meet in Kabul for the first time in 36 years. “It is very exciting to send our team across the border to Afghanistan,” said Pakistan Football Federation (PFF) secretary Ahmed Yar Khan Lodhi.

Afghanistan and Pakistan frequently held sports fixtures in the past, but ties were cut after the Soviet invasion of Afghanistan in 1979, followed in subsequent decades by civil war and Taliban rule.

“The fact that we are hosting our first international game in 10 years, and the first against Pakistan in Kabul since 1977, represents a major highlight for football in our country,” AFF secretary general Sayed Aghazada told FIFA.com. “It shows that after a very difficult period we are returning to normality … Of course we expect a sold-out crowd.”

Football was not banned under the Taliban but the old Ghazi stadium in Kabul was a notorious venue for executions, stonings and mutilations.

Tuesday’s game—at the separate AFF ground in the city—will be followed on Thursday by the start of the second season of the Afghan Premier League, with eight teams competing to be champions.

Cricket, as well as football, has boomed in popularity since the fall of the Taliban. Cricketing minnows Afghanistan are set to take on Test nation Pakistan in a Twenty20 match on Dec. 8 in the United Arab Emirates.