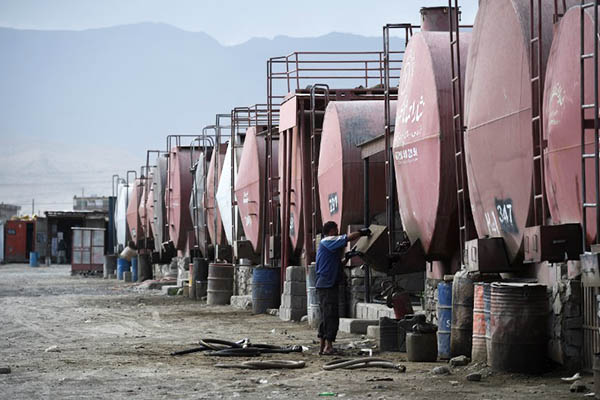 Tax-exempt military fuel imported into Afghanistan is being sold on the open market, industry officials and a new anti-corruption report reveal, causing the government huge revenue losses as Kabul struggles to wean itself off foreign aid.

An AFP team witnessed first-hand evidence hinting at how duty-free fuel destined for NATO and local forces is being sold commercially when an Afghan energy official swooped unannounced on a Kabul oil depot last week. Flanked by a gaggle of assistants and bodyguards, the official examined a sheaf of customs documents from visibly nervous fuel tanker drivers, scouring the fine print for any trace of the illicit practice that traders have long claimed is crippling the industry.

Among the documents from one driver was a “maafinama”—a tax-exemption certificate for military fuel that cuts costs by around $200 a ton—showing fuel imported from Turkmenistan in the name of the Afghan interior ministry. Only fuel bound for foreign troops as well as the defense and interior ministries—responsible for Afghan military and police—is exempted from custom duty, following a security agreement between the government and NATO.

“What is this fuel doing in this market?” asked the official, standing near huge cylindrical reservoirs in the depot that supplies fuel to commercial traders and fuel stations. “That’s the big question,” he continued as he snapped pictures of the document and truck, pledging a full investigation.

No commodity is as vital to the reconstruction effort in war-ravaged Afghanistan as fuel—and none more at risk of being stolen, smuggled or wasted in a country bedeviled by corruption, observers say.

Last year, more than one million tons of internationally funded military fuel was imported into Afghanistan, the finance ministry said, with its uncharged customs duty estimated to be around $100 million. “The custom duty exemption mechanism… [for] international forces has led to abuse by fuel traders which allows them to illegally profit,” said a new report by the Independent Joint Anti-Corruption Monitoring and Evaluation Committee (MEC), which was seen by AFP. The report, due to be released on Tuesday, said 20 commercial companies were issued tax-exemption certificates last year.

The process to obtain “maafinamas” involves a tightly bureaucratic application system that goes through the U.S. military, NATO and the Afghan finance and foreign ministries—but the document remains prone to “misuse.”

NATO said it could not immediately comment, and the interior and defense ministries did not respond to AFP’s queries.

Shafiq Qarizada, deputy minister for customs, told AFP he “cannot confirm nor deny” whether exempted fuel is washing up in the commercial market.

The comments come ahead of a crucial conference in Brussels in October, where donor countries are expected to reaffirm civilian aid funding for Afghanistan over the next four years. Afghanistan is battling what observers label “donor fatigue” as efforts to replace its huge foreign aid dependency with self-sufficiency are thwarted by corruption and criminal networks imperiling the already weak economy.

Misuse of fuel exemptions is killing local businesses in a country that is heavily dependent upon imports to meet its energy needs, two private traders told AFP. The exemption waives off 12 percent customs duty among other charges, officials say. “Maafinamas have contaminated the commercial market,” said the official who carried out the inspection. “How can a trader who dutifully pays taxes compete with cheaper maafinama fuel? This is suffocating lawful businesses and encouraging smuggling of fuel… and resulting in custom revenue losses worth millions.”

In May last year 17 Afghan policemen were killed when the Taliban stormed their remote base in the mountainous province of Badakhshan. Officials at the time said the policemen were unable to escape because they lacked adequate fuel for their vehicles, raising concern that military fuel was not reaching its intended destination.

There are ongoing discussions for a Memorandum of Understanding between NATO and the finance ministry to curb the misuse of maafinamas, multiple sources including Qarizada told AFP. Among various reforms being discussed is a suggestion to levy customs duty on all military fuel and reimburse payments for actual deliveries.

“MEC understands from interviews with both [NATO] and [finance ministry] that this reform is strongly supported but it is still not implemented,” the MEC report said. “Why not? Is the reason for the delay perhaps another instance of corruption?”