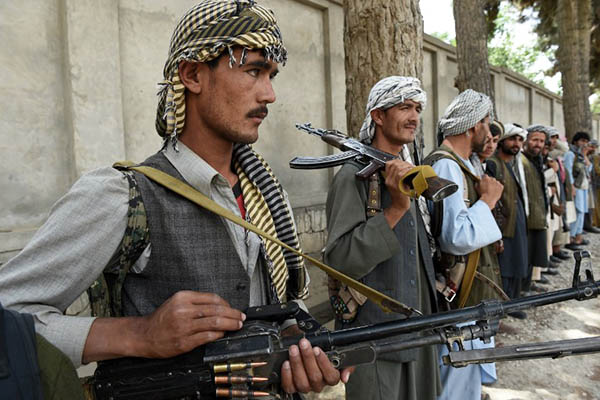 The commander known as Pakhsaparan, or the “wall breaker,” barked out commands at his bandolier-draped fighters, part of a patchwork of anti-Taliban militias in northern Afghanistan seeking to augment hard-pressed Afghan forces in a strategy fraught with risk. The Taliban recently came close to overrunning Kunduz city, in the most alarming threat to any provincial capital since the 2001 U.S.-led invasion of Afghanistan, as the insurgency spreads across the north beyond its traditional southern stronghold.

With Afghan forces suffering record casualties as foreign troops pull back, Kabul is increasingly relying on former mujahideen strongmen with checkered pasts as a bulwark against the insurgents—a gambit observers say is akin to fighting fire with fire. Powerful among them is Mohammed Omar—popularly known by his battlefield moniker Pakhsaparan for his touted ability to flatten walls—who controls hundreds of fighters in his fiefdom on the banks of the Khanabad River in Kunduz province.

“This is a people’s uprising,” said Pakhsaparan, with a trimmed snow-white beard and a deep booming voice as he showcased his militia to AFP in Kunduz city, wielding assault rifles, lugging rucksacks with RPG warheads and draped in bandoliers of ammunition. “The people are prepared to send their sons to the frontlines to fight against the Taliban, to defend their home, their country, their honor and their government.”

Kabul has denied arming militias, but Pakhsaparan admitted receiving ammunition from the government and the venue for the interview—inside the provincial governor’s compound—was testament to the support he draws from local officials.

The mobilization of militias represents a complete departure from previous government efforts to disarm these groups, blamed for devastating Afghanistan during the civil war in the 1990s and setting the stage for a Taliban takeover. It also lays bare the shortcomings of the multi-billion dollar U.S.-led effort to develop self-reliant Afghan forces, suffering large daily casualties and struggling to rein in an ascendant insurgency on their own as the war expands on multiple fronts.

“Afghan military and police are incapable of fighting without us,” a sub-commander under Mir Alam, an ethnic Tajik and one of the most influential militia leaders, told AFP at his base near Kunduz city. “They don’t have an intimate knowledge of these lands as we do. Without militias Kunduz will fall to the Taliban,” he said, sporting a fat gold ring studded with a turquoise gemstone.

President Ashraf Ghani’s government has been widely slammed for a “leadership crisis” which has resulted in a protracted delay in the crucial appointment of a defense minister. Kabul scrambled for a response when the Taliban nearly stormed Kunduz city in late April, rushing in reinforcements from other provinces—but also calling Mir Alam, who was in neighboring Tajikistan at the time, for help.

As the Taliban have flooded the region this fighting season, causing the war’s center of gravity to shift north, a disturbing pattern is emerging: the serial numbers of several weapons seized from insurgents match those issued to Afghan forces, militiamen said. “It’s the government’s job to investigate how that is happening,” said Alam’s sub-commander, requesting anonymity.

The Taliban have been pushed back from the fringes of Kunduz city but it still appears a quicksand of instability. Local residents describe the Taliban as a Trojan Horse, infiltrating the city despite a ring of security to orchestrate a spate of regular bombings that have whipped people into a frenzy.

“They may not have stormed the city but they have a reach deep within. They are everywhere, they are among us, and that’s scary,” said civil society activist Marzia Rustami. She said she had been shattered by a recent bombing that killed Noor-ul-Huda Maulvizada Karimi, a cleric who frequently took to the airwaves to denounce the Taliban and advocate women’s rights.

Haji Amanullah Utmanzai, a Kunduz elder, said local militias, controlling unruly patchworks of fiefdoms and blamed for human rights abuses, were hardly restoring security. “Put an armed guard in everyone’s house in Kunduz and even then no one will feel safe,” he said. “Militias are abusive, forcibly collect taxes from people, steal harvests from farmers and create a gulf between people and the government,” he said.

But the provincial government insists “uprising forces” supplement Afghan troops by acting as crucial tripwires for the Taliban. “There is no such thing as good militia or bad militia. Any militia fighting the Taliban are good,” said deputy Kunduz governor Hamdullah Danish.

Danish insisted the government was maintaining a tight grip over the armed groups to prevent any abuse.  But the exact number of militia forces in Kunduz seems unknown, with estimates ranging from 2,000 to 10,000—and observers say that in itself indicates a lack of government oversight.

After the interview, dozens of Pakhsaparan’s men left the governor’s compound, walking out of the gate in a single file under the afternoon sun. Many piled into pickup trucks and hatchbacks, some cramming into open boots, honking their way out while others prowled through the streets on foot, rifles perched on their shoulders. The passers-by beat a hasty retreat, giving way to the militiamen.