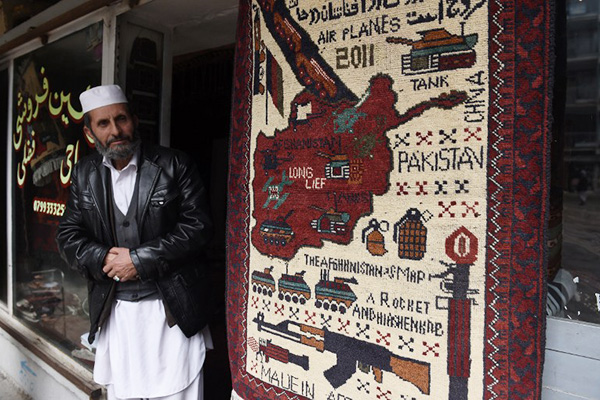 From AK-47s to drones, weavers in Afghanistan are depicting their country’s bloody decades.

More than three decades of war have damaged Afghanistan’s once-thriving carpet industry, but weavers are tapping into the bloody past to boost their fortunes with “war rugs” depicting guns, tanks and warplanes.

On Chicken Street, the most famous street in Afghanistan during the “hippie trail” tourist days of the late ‘60s and ‘70s and still the place to come for souvenirs, some of the carpets in the shops look like pages of the country’s war-torn history.

Since the Soviet Union invaded in 1979 Afghanistan has been in a state of near-constant conflict, and this strife is woven into the fabric, literally, of the woolen rugs. Helicopters, tanks, Kalashnikovs, grenades, the Americans’ distinctive B-52 bombers and even drones form the designs, in place of the traditional patterns of landscapes and flowers.

One has a map of Afghanistan with “Tora Bora” marked—the suspected mountain hideout of Al Qaeda leader Osama bin Laden, from where he fled the U.S.-led invasion in late 2001. Another carries a solemn reminder of the 9/11 attacks that prompted the invasion, showing the World Trade Center’s twin towers with planes nearly hitting them, overlaid with Afghan and U.S. flags and a peace dove. Carpets with pictures of Soviet troops withdrawing from Afghanistan leaving behind tanks and Kalashnikovs also feature.

The U.S.-led war in Afghanistan brought with it a flood of expats—aid workers, diplomats and security contractors—bringing boom times for carpet sellers. Now the expat population is falling fast, the rug industry is struggling and the transformation in styles is an attempt to attract more business from a dwindling band of foreigners.

A carpet depicting the map of Afghanistan with U.S. fighter planes around it and the words “terrorism”, “Pakistan”, “China”, “U.S.A.” and “Britain” costs between $30 and $300, depending on the quality.

Mohammad Anwar, 62, who has been in the business for over 40 years, says designs have to keep up with demand. “These rugs with pictures of war in them are for gifts. Foreigners buy them and keep them as a reminder of what kind of country they have been to,” he said.

Foreign soldiers used to be the main buyers, he said, but now very few of them remain after NATO’s drawdown of forces. NATO ended its combat mission on Dec. 31 after 13 years of fighting the Taliban insurgency in Afghanistan and downsized its forces from a peak of 130,000 in 2012 to about 17,000, who will focus on training the Afghan police and army and conducting a limited counter-terrorism mission.

Haref Fazli, another Chicken Street rug seller, said that just as traditional weavers depicted the natural world of flowers and animals that surrounded them, so weavers now are showing war, because war is what has surrounded them for more than three decades. “From long ago the carpet weavers would weave the map of Afghanistan on rugs as a symbol of the country, but when war began, the war elements such as guns, tanks and so on were added on the rugs,” he said.

Carpets have been a main source of income for millions of Afghans during the years of war, but business and sales have dropped drastically as foreigners have left. Political uncertainty following disputed presidential elections last year, and an array of other daunting problems, including a resilient Taliban insurgency and widespread corruption, has also badly hit the carpet business.

But Mohammad Kabir Raouf, 58, another seller, is hopeful that the new artistic transformation of patterns will help bring the business back on track. “The war has had some good impact on the rug industry too, people have become more creative,” Raouf said. “There are many varieties of rugs in the market nowadays, they draw pictures, war elements, many different designs just to attract people,” he said.