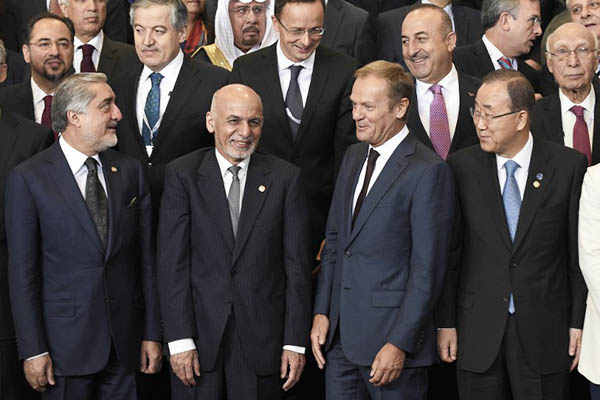 World powers pledged billions of dollars for war-ravaged Afghanistan until 2020 at talks in Brussels on Wednesday amid fresh calls for the Taliban to make peace 15 years after they were driven from power.

Afghanistan’s President Ashraf Ghani met officials from more than 70 countries and international groups, including U.S. Secretary of State John Kerry and U.N. chief Ban Ki-moon, at the conference. E.U. foreign policy chief Federica Mogherini announced that the 28-nation bloc will pledge 1.2 billion euros a year and said “I would expect similar levels of engagement from our partners.”

“There will not be any donor fatigue on Afghanistan,” she added.

Mogherini said a dinner of key regional players including China, India and Pakistan on Tuesday night had “found common ground” for the Afghan peace process. “The European Union will try to facilitate this as much as possible in the coming months,” she said.

Kerry urged the Taliban to follow the example of notorious Afghan warlord Gulbuddin Hekmatyar and make an “honorable” peace with the Kabul government to end years of violence. Hekmatyar, the so-called “Butcher of Kabul” who heads the Hezb-i-Islami group and was a key figure in Afghanistan’s civil war in the 1990s, signed a peace deal with Ghani in September.

“This is a model for what might be possible,” Kerry added, urging Russia and Afghanistan’s neighbors to play a role.

The Taliban continue to wage a bitter insurgency almost exactly a decade and a half after the U.S.-led invasion that toppled the group in the wake of the 9/11 attacks, launching a major offensive on the city of Kunduz earlier this week. Afghanistan remains dependent on foreign aid and a limited NATO military presence, despite having improved key life indicators including maternal mortality and lifespan.

But the brutal war in Syria and the worst migration crisis since World War II have left Afghanistan facing competition for dwindling international donor funds.

Total pledges in Brussels looked set to fall short of the four billion dollars a year for four years that the international community promised for Afghanistan at the last such conference in Tokyo in 2012. The United States and the E.U. currently each provide about a third of all international aid to Afghanistan, with Japan the next largest donor.

For security, NATO nations have already committed at a summit in Warsaw in July to maintain troop numbers in Afghanistan and uphold a pledge of $5 billion a year to fund local forces until 2020. In exchange for the money in Brussels, donors will expect the Kabul government to promise it will tackle spiraling corruption and waste, while working on political reform and human rights.

The United States has spent around $110 billion on Afghanistan’s reconstruction since 2001, more than the cost of the Marshall Plan that rebuilt a devastated Europe after World War II, but with limited results. On the eve of the conference the E.U. and Kabul published a controversial deal to speed up Afghanistan’s taking back of migrants from the Europe, which faces its biggest refugee crisis since World War II.

The plan involves possibly building a dedicated terminal for deportees at Kabul airport. E.U. officials have however denied that aid pledges will depend on Kabul accepting the return of 80,000 asylum-seekers. Zubaida Akbar of aid group Save the Children said the plan for forcible returns was “extremely concerning” given the violence still wracking Afghanistan.