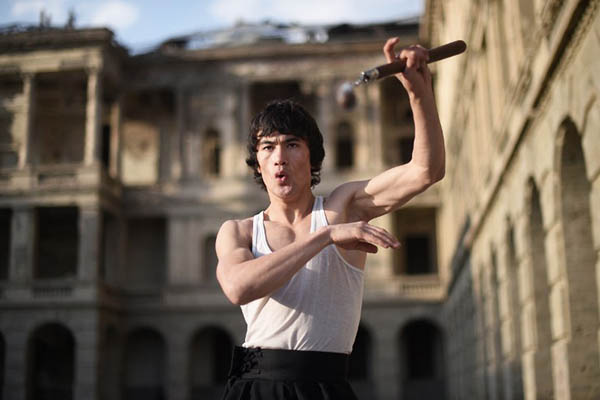 Abbas Alizada is a celebrity in his homeland and has become a familiar face on local media.

Dressed in a white vest, black trousers and light shoes despite the bitter Afghan winter, Alizada bears a striking resemblance to his idol—legendary martial arts movie star Bruce Lee. Alizada twirls his nunchuks in front of the shell-blasted walls of the former royal palace, an evocative monument to the 35 years of war that have ravaged Afghanistan. Then he leaves the enclosure, smiling, sunglasses on his nose, his fans can finally meet him, shake his hand—and take selfies with him.

He is a member of Afghanistan’s Hazara community, an ethnic group with distinctively Central Asian features that add to his resemblance to Hong Kong star Lee. With more than 50,000 followers on Twitter and 40,000 likes on Facebook, Alizada has become quite a celebrity in Afghanistan, known locally as “Bruce Hazara.” He has become a familiar face on local media and now he is dreaming of Hollywood stardom.

“When I was eight years old I saw the Bruce Lee movies, and I was hooked,” he told AFP in his brother’s office in Kabul. “I said I will be the Bruce Lee of Afghanistan one day. I know I cannot be Bruce Lee, but I follow in his path,” he said.

Alizada is the youngest of 10 children and his older brothers have followed his career closely. One of them, 25-year-old Ahmad Zia, works as his manager, coach and secretary. “I’m very hopeful that my brother will become a member of Hollywood,” Zia said.

Alizada dreams of working with Hong Kong martial arts movie star Jackie Chan—who he respectfully refers to as “Mr. Jackie.” He also idolizes action stars such as “Mr. Rambo”—Sylvester Stallone—Chuck Norris and Jean-Claude Van Damme. But his biggest ambition is to complete The Game of Death, the film Lee left unfinished when he died in 1973. “Bruce didn’t finish his last movie, he did half of the movie. My project is to complete this movie,” Alizada said.

Hollywood or no, Alizada is already the pride of the Kabul district where he lives. “Abbas is a hero, he’s a superstar for us,” engineer Mohammad Ali Mokhtar, 25, said. “Our country faces difficult problems, like drugs, security, and so on. We hope Abbas will raise the name of our country.”

Apart from the country’s reputation, Mokhtar also hopes Abbas can fly the flag for the Hazaras, a largely Shia Muslim community that has suffered sectarian discrimination and violence in the past from Sunni hardliners. “It’s important for us Hazaras especially, because we like to live in a peaceful environment,” he said.

Fellow fan Ramin, a politics student, said the first time he saw him on the TV, “I was shocked how much he looked like [Lee]. I’m so pleased that we have such a character in Afghanistan.”

When he’s not training at Darulaman or in his martial arts club, Alizada looks after his father, who is paralyzed down his left side. The old man encourages his youngest son and hopes he can become a Hollywood star.