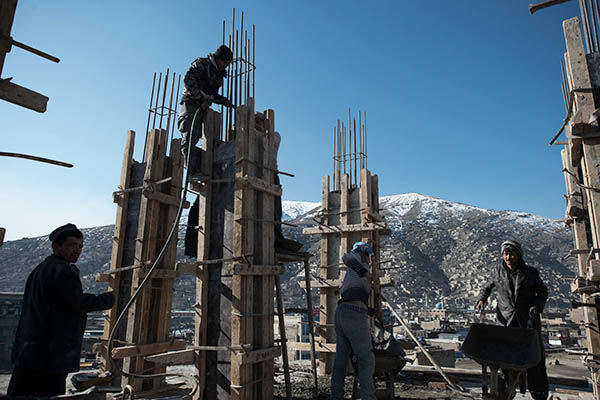 Jackhammers are down and excavators gather dust at a Kabul construction site, spotlighting an aid-reliant economy on the edge of a precipice as Afghanistan’s war winds down and a tenuous political transition looms.

The country’s banks are at grave risk of being put on an international blacklist this month if parliament fails to pass a long-demanded money-laundering bill—with potentially devastating consequences for the already-fragile economy.

Economic growth fell through a cliff this year, touching a low of three percent from around 14 percent in 2012, with aid and investment in the war-ravaged country seeing an inexorable exodus. The timing is largely to blame, observers say—the year 2014 has come to symbolize a feared bogeyman for many Afghan businesses. U.S. plans to withdraw a bulk of its troops by December after 13 years of war, despite a resilient Taliban insurgency and next week’s tense run-off election, has stoked concerns over the future of the country.

Askari Wahedi hasn’t abandoned Afghanistan like several of his business peers who have transferred their wealth overseas and bought second homes in Dubai or Istanbul. At least not yet. But the 28-year-old director of logistics company Askary Group has seen business evaporate in just a few months. “I was here last year, now I am here,” he said, swinging his hand from his head to his waist to illustrate his plunging fortunes.

Last year he had 15 contracts with the U.S. army—to provide logistical services such as operational maintenance and catering at military bases. His turnover soared and he employed 300 people across various provinces including in Helmand and Kandahar—Taliban-infested areas where joblessness is endemic.

But with military bases winding up operations as U.S. forces pull out, he only has one contract left—due to expire in two months—forcing him to lay off 260 employees. He also invested $2 million in constructing a six-story residential tower—where construction tools now lie idle and workers slumber in the shade. But in a sagging property market, he hasn’t managed to sell a single apartment.

“What options do I have left in this country?” he said, slouched in an overstuffed armchair in his posh office in Kabul. “If I don’t have an alternate business within two months, I will have to fire everyone and shut down this office.”

Some Afghan observers, dismayed by the international withdrawal, liken the situation to a coma patient who is propped up for years through intravenous drugs. The dosage is then suddenly stopped—and the patient is expected to get up and run. “Even after 13 years of international support, Afghanistan is just not ready—or able—to take charge of its own affairs,” said a cashier at a Kabul-based branch of Finest Supermarket, a chain of Western-style retail outlets. He did not wish to be named.

But others in Afghanistan counter that view by asserting what many economists have dubbed as the “aid curse.” The double-digit growth boom of previous years was mainly a result of a huge influx of foreign aid money since U.S.-led forces ousted the Taliban from power in 2001.

Afghanistan, sitting on mineral deposits estimated at around $3 trillion, needs to be weaned off its dependence on this money as troops and foreign contractors depart. But that goal would be a long shot without key structural and financial reforms in the country long convulsed by war and corruption, economists say.

For one, Afghanistan risks being cut off from international financial institutions if parliament does not pass a key money laundering law by June 22.

The Financial Action Task Force (FATF), an international body that sets global standards on tackling money laundering, has threatened to blacklist Afghanistan if it does not pass the law by that deadline. So far Afghan lawmakers have shown what many see as staggering indifference to the crisis, refusing to relent despite various parliamentary debates on the proposed law.

Afghanistan is currently in the middle of elections to choose a successor to President Hamid Karzai in the country’s first democratic transfer of power. A second-round presidential vote is scheduled on June 14 between former foreign minister Abdullah Abdullah and ex-World Bank economist Ashraf Ghani.

While searching for alternate business ideas, he recently approached the Afghan agriculture ministry to seek help to buy land for a $500,000 cold storage facility. The entrepreneurial idea could prove lucrative in a country where fresh fruits are often transported at huge costs to cold storages in neighboring Pakistan in the sweltering summer. Wahedi needed the ministry’s blessing to purchase land to stave off “greedy officials” who would harass him for bribes should he go it alone, he said. But for three months, he said, he was tossed around from one ministry to another—until he finally gave up. “I have a business plan, I have the money. But I still can’t make it here,” Wahedi said. “The bureaucracy, the corruption, the insecurity won’t let me.”