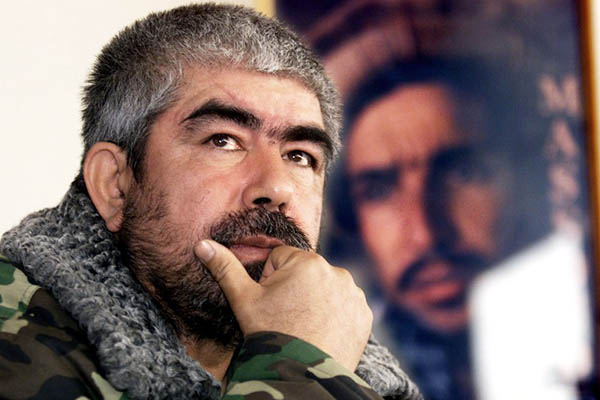 Observers say the warlord’s attempts to take on militants is already having an impact on the ground.

As the Taliban expand into his old stomping grounds in northern Afghanistan, former warlord General Abdul Rashid Dostum—who boasts of having a Ph.D. in killing militants—is galvanizing legions of devout followers and erstwhile foes for battle.

The fearsome Uzbek general, who holds no formal military post, recently launched an offensive with loud, bellicose declamations against the Taliban, who are making surprising inroads into Faryab province as the insurgency’s center of gravity shifts north from its southern strongholds. But the much-hyped campaign, which saw the vice president in military uniform touring the frontlines in a tank with his two sons, failed to stem the insurgent advance as the Taliban came close to overrunning the provincial capital and besieged major districts.

In a desperate effort to defend his home territory, he is activating private anti-Taliban militias in a risky gambit now commonplace across the embattled north.

More significantly, the battle-hardened general, who has repeatedly switched loyalties over 40 years of conflict, is joining forces with a longtime rival in an unprecedented alliance.

Uzbek militiamen loyal to his Junbish-e-Milli party are fighting alongside and sharing weapons and intelligence with Jamiat-e Islami, the Tajik-dominated party of the other main northern strongman—Atta Mohammad Noor, the powerful governor of Balkh province.

The union of Junbish and Jamiat brings together large bands of armed men who share a bitter history of rivalry and clashes, a potential master stroke in the game of factional Afghan politics that offers the local population new hope of vanquishing the ascendant Taliban. “General Dostum is not an engineer, General Dostum is not a doctor, General Dostum has a Ph.D. in eliminating the Taliban,” the ex-warlord said about himself earlier this year in comments cited in the local media. “I will bring the Taliban to its knees.”

The tactical alliance, whether or not longlasting, is already having a visible impact on the ground. When the Taliban attempted to overrun provincial capital Maimana on the night of Oct. 4—emboldened by their audacious if brief capture of neighboring Kunduz city—the coordination between militiamen from both sides in part helped repel the insurgents. “Before this they fought each other, hurt each other. The result was zero,” said Hafizullah Fetrat, the local head of the Afghan Independent Human Rights Commission. “Their unity has reduced human rights abuses. It gives people hope as they overcome past rivalries to fight a common enemy that is stronger than ever before.”

Dostum, who has a catalogue of war crimes attached to his name, is deified as a hero in Faryab, where the streets are festooned with life-size posters of the mustachioed general. “Many of those posters were taken down on the night the Taliban raided Maimana,” a local resident told AFP, as people hastened to hide or erase anything that could attract the wrath of insurgents who recently pilloried Dostum as a “poor imbecile general.”

“But people have faith that Dostum will save our endangered land. Ordinary people are selling their cattle to buy weapons to fight for him.”

His biggest strength, both supporters and detractors agree, is his ability to inspire an army of supporters across the ethnic divide to fight for him—despite his intimidating personality. “He is a great motivator at a time when morale is sagging,” a Jamiat militia commander told AFP, declining to be named.

He recalled a protest in Maimana in 2008 when dozens of policemen besieged his palatial house in Kabul in a tense standoff, accusing the strongman of assaulting and abducting a rival. As the news spread, crowds multiplied outside the Junbish office. “In 10 minutes there were 150 people; in 20 minutes, 2,000 people; in 30 minutes, 4,000,” the Jamiat commander said. “That really shows the power of Dostum. People worship him.”

Loyalists and civilians in Faryab have almost mythologized the man, who they glorify for rising from extreme poverty to the heights of power. “He is known for frontal attacks on his enemies and showering wealth generously on his people,” said Habibullah Syed, police chief of outlying Andhkoy district.

But his larger-than-life persona belies the extreme barbarities Dostum is well known for, including allegedly allowing hundreds of Taliban prisoners to be suffocated to death in shipping containers in 2001. It also strongly highlights Afghanistan’s warlord culture, where figures like Dostum remain potent and relevant despite a democratically elected government in Kabul.

“Dostum epitomizes a tradition of charismatic ethnic leaders who protect their followers with weapons,” said Brian Williams, author of a biography of Dostum, The Last Warlord. “This tradition co-exists uncomfortably alongside the newer ruling tradition of Western-style technocrats like the English-speaking President Ashraf Ghani. The two represent a fascinating melding of Afghanistan’s provincial tribal past and its centralized governmental present.”