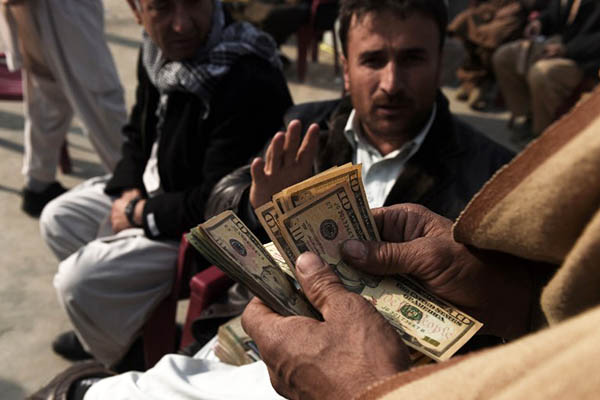 The Taliban insurgency may still be raging but the poor state of the economy could pose a bigger threat to Afghanistan’s long-term viability, and huge mineral reserves are unlikely to offer a quick fix.

In Kabul’s Sarayee Shahzada market, moneychangers wave thick bundles of Afghanis, dollars, rupees and dirhams, but the customers are not packing the alleyways like they used to and business is well down on two years ago. After a decade of near double-digit growth, the Afghan economy has stalled in the last two years, hit by a disputed presidential election and the end of NATO’s combat mission, which formally closed on Sunday. Now, the tricky political and security transitions are joined by an equally tough economic hurdle.

The fact is not lost on the moneychangers who deal in “hawala” transactions, an informal system of transferring funds internationally seen as a barometer of economic confidence. Omiad Khan, sitting in his family business in the market, said more money was leaving Afghanistan these days, and less coming in. “As the withdrawal got nearer, investors in Afghanistan moved their money abroad—they transferred it to Dubai, China, Pakistan, India, Turkey,” he said.

A recent survey of more than 9,000 Afghans by the Asia Foundation, a U.S. NGO, found unemployment and a weak economy were the biggest concerns, beating insecurity and corruption. Since 2002, America has pumped more than $104 billion into Afghanistan—a figure that, when adjusted for inflation, surpasses the Marshall Plan that helped Europe rise from the ashes of World War II, according to the Special Inspector General for Afghanistan Reconstruction (SIGAR), a U.S. watchdog. But the bulk of this money has gone on combat operations rather than reconstruction and while Afghan forces are taking over the fight against the Taliban, their wages still come from overseas support.

The Kabul government is expecting income this year of around $1.8 billion—less than the value of Afghanistan’s opium crop, which feeds the coffers of the Taliban. Without the $8 billion a year in international aid currently guaranteed until at least 2016, the Afghan government is unable to pay the salaries of the 350,000 soldiers and police on the front line of battling the Taliban.

However, Afghanistan’s NATO decade has brought huge economic growth—GDP has risen from $2.5 billion in 2001 to more than $20 billion, according to the World Bank, boosted by transport, construction, telecoms and media.

Agriculture, not including opium, has also boomed to the point where dry fruits have surpassed carpets in the country’s principal exports. That is good news for Haider Refat, the head of a company that produces and exports raisins, figs, pistachios and the like.

“Before, we only exported to two countries [India and Pakistan] but now we export to around 45 countries,” he said. Afghan producers are earning significant money sending dried fruits to the Gulf, Australia and Canada, helping create jobs in a country of 30 million where 400,000 young people join the employment market each year. Haider says that boosting exports further needs more reliable energy supplies, better financing for factories and more promotion of Afghan goods overseas.

One sector which has caught investors’ eyes more than any other is mining. The U.S. Geological Survey has estimated the value of Afghanistan’s mineral deposits, including gold, iron and copper, at between one and three trillion dollars. This could in theory free the Afghan government of its reliance on foreign aid, but there is a dizzying list of obstacles to exploiting the potential, Afghan mineral expert Javed Noorani said.

Afghanistan needs to reform its law on mines, make the process of bidding for concessions more transparent, extend the rail network and tackle rampant corruption in existing mines. To do all this and set up a proper mining sector will take at least 10 years, estimated Noorani, who urged President Ashraf Ghani to develop a long-term vision for the sector.

Before that, the country needs stability and will have to create services and opportunities to keep its young population, a third of whom live in poverty, away from the lure of extremism.

In the moneychangers market, Haji Mubin Ahmad is blunt in his pessimism about the future. “Our economy still relies on international aid. Cutting the aid is like cutting the oxygen—we will die,” he said.