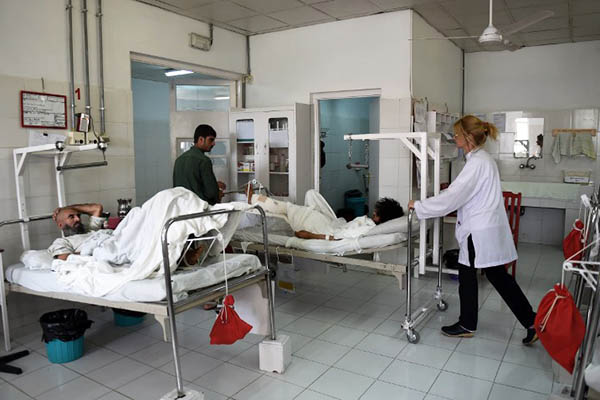 Bruised and frightened, three-year-old Fatima flinches as the thunderous boom of Taliban rockets rolls across the capital of Helmand, an opium-ravaged province that epitomizes the biggest failure of the 15-year U.S.-led war in Afghanistan.

For years Helmand was the centerpiece of the Western military intervention in Afghanistan only for it to slip deeper into a quagmire of instability, with almost the entire southern province teetering on the verge of collapse. Intensified fighting has killed hundreds and forced thousands to flee to besieged capital Lashkar Gah, sparking a humanitarian crisis as the city—one of the last government-held enclaves—risks falling to the Taliban’s repeated ferocious assaults.

Bearing the brunt of the Taliban upsurge are ordinary civilians such as Bismillah, who lost everything when an artillery shell landed on his house in the volatile district of Nad Ali. “My house was on the frontline,” said the father-of-eight, holding his daughter Fatima in his arms, a plaster cast on her tiny leg. “Cattle were getting shot, humans were getting killed, everyone was running for their lives,” he told AFP at Lashkar Gah’s Italian-run Emergency hospital, as bursts of rocket fire echo outside.

The packed surgical center last month received 216 war-wounded over a two-week period, the highest number ever. “Bullet, mine, shrapnel, bullet, amputation,” said Vesna Nestorovic, Emergency’s medical coordinator, pointing out injuries from bed to bed. “And there are lots of children.”

Some 5,000 war-displaced families have streamed into Lashkar Gah in recent months, fleeing in pickup trucks with jerry cans, mattresses, firewood and farm animals. “My children have not eaten bread for two months,” said one woman in a sky-blue burqa begging for assistance outside a relief agency’s office. The desperate new arrivals, many uprooted from once-peaceful districts, are sheltering in the mud-walled homes of locals—often dozens to a house.

Helmand, a mosaic of mountain-fringed flatlands crisscrossed by the Helmand river, is the heart of the multi-billion dollar opium trade and long a coveted prize by the Taliban. The province, Afghanistan’s largest, also offers safe exit routes to the insurgents across the border to Pakistan or to neighboring Iran.

But how a few hundred Taliban fighters took swathes of Helmand from tens of thousands of Western-trained army and police still beggars belief, highlighting the failures of the U.S. invasion of Oct. 7, 2001, observers say.

“Helmand most of all epitomizes not a military failure but a political failure,” said Stephen Grey, author of Operation Snakebite, a book about Western military deployment in Helmand. “By failing to understand the province’s tribal dynamics, we consistently ended up fighting with the wrong side, allying ourselves with interests regarded with contempt by many ordinary Helmandis.”

The rapid fall of districts has raised concerns about the capacity of Afghan forces, beset by unprecedented casualties and blamed for corruption, desertion and “ghost soldiers” who do not exist on the payroll but whose salaries are usurped by fraudulent commanders.

Fears that ammunition is being sold to the Taliban has prompted the government to issue a new edict: new ammunition will be issued only upon receipt of expended bullets.

Helmand Governor Hayatullah Hayat has sought to downplay fears of the fall of Lashkar Gah. He has pulled hundreds of troops from far-flung districts in a controversial “strategic retreat,” redeploying them to bolster Lashkar Gah as the U.S. steps up air support.

But nerves are worn in the city, with Hayat fielding frequent requests from civil society groups for emergency evacuation to Camp Shorabak, a fortified military camp, if the Taliban breach the city gates. “The government is in control,” Hayat said.

But his assertion is challenged by who controls the airwaves.

As the fighting has intensified the Taliban recently ordered private telecom operators to shut down mobile signals to prevent spying on insurgent positions. It is an open secret that telecom operators are forced to comply in the face of insurgent threats.

And for those displaced by the fighting, like 40-year-old farmer Hamidullah, the irony is unmistakable: most peaceful areas of Helmand are under Taliban control. “My relatives in Nawa district say: ‘Come here, there’s no fighting, no insecurity, no robbery, no one asks for a bribe’,” he said. “If things get worse I will take my wife and children there.”