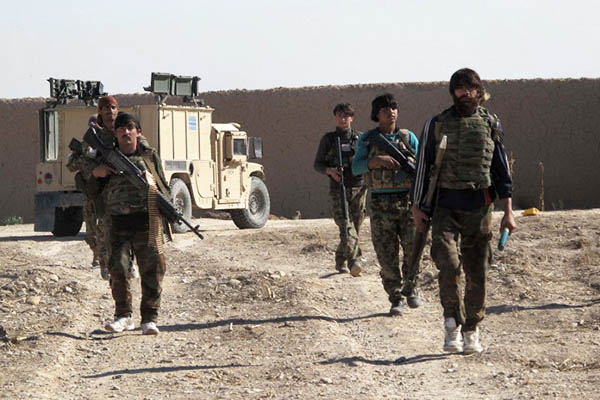 Afghanistan’s southern province of Helmand is on the verge of falling to the Taliban, with 90 soldiers killed in fierce clashes, its deputy governor said Sunday, imploring Kabul for intervention in an unusual Facebook post.

The warning bore grim similarities to the security situation that led to the brief fall of Kunduz in September—the biggest Taliban victory in 14 years of war.

Clashes between insurgents and government forces have intensified in several key districts of Helmand, fuelling concern that the opium-rich province is on the brink of a security collapse.

“I know that bringing up this issue on social media will make you very angry,” deputy governor Mohammad Jan Rasoolyar wrote in a Facebook post addressed to President Ashraf Ghani. “But I cannot be silent any more… as Helmand stands on the brink… Ninety men have been killed in Gereshk and Sangin districts in the last two days.”

Rasoolyar pleaded for urgent assistance to save the province that British and U.S. forces struggled for years to defend, saying he had been unsuccessful in making contact with the president through other means.

The fall of Helmand would deal another stinging blow to the country’s NATO-backed forces as they struggle to rein in the ascendant insurgency.

Rasoolyar alleged that government officials around Ghani are downplaying the gravity of the situation in the province. There was no immediate reaction on Rasoolyar’s post from Ghani’s office. The defense ministry in Kabul strongly denied that Helmand would fall and rejected claims of 90 deaths.

But local officials backed Rasoolyar’s assertions, saying that fighting was particularly worse in the northern district of Sangin, which has long been a hornet’s nest of insurgent activity. Some reports late Sunday said insurgents had overrun the district, with government employees fleeing the area after large casualties, but there was no official confirmation.

This month marks a year since the U.S.-led NATO mission in Afghanistan transitioned into an Afghan-led operation, with allied nations assisting in training local forces. President Barack Obama in October announced that thousands of U.S. troops would remain in Afghanistan past 2016, backpedalling on previous plans to shrink the force and acknowledging that Afghan forces are not ready to stand alone.

Ghani has been pushing to jump-start peace talks with the Taliban, which stalled after the insurgents belatedly confirmed longtime leader Mullah Omar’s death earlier this year. Afghanistan’s spy agency chief resigned earlier this month after a scathing Facebook post that vented frustration over Ghani’s diplomatic outreach to Pakistan, aimed at restarting the talks. Rahmatullah Nabil’s resignation raised uncomfortable questions about a brewing leadership crisis in Afghanistan as the insurgency gains new momentum.