Home Latest News Afghanistan’s Soil Will Not be Used to Harbor Extremists: Abdullah

Afghanistan’s Soil Will Not be Used to Harbor Extremists: Abdullah 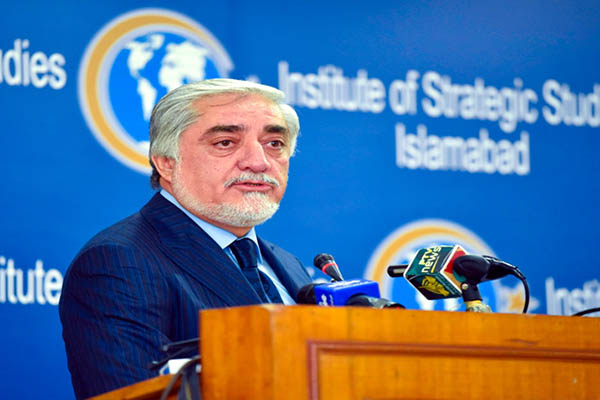 Afghanistan will never allow its soil to be used by extremist forces posing a threat to any other nation, High Council for National Reconciliation Chairman Dr. Abdullah Abdullah said on Tuesday.

Addressing a conference at the Institute of Strategic Studies in Islamabad alongside Pakistan Foreign Minister Shah Mehmood Qureshi, he acknowledged Pakistan’s vital role in facilitating the Afghan peace process. He said both countries desired peace as they had paid a heavy price in the war on terror, adding that militants were still trying to act as “spoilers” to the peace process.

Abdullah said that the start of intra-Afghan talks between Kabul and the Taliban was an important opportunity, as it offered the “best hope to put the war behind us.” He said Kabul had directed its negotiating team to exercise patience and be prepared to make any necessary compromises.

The Afghan leader said both Pakistan and Afghanistan were facing several shared serious threats and challenges, including terrorism, extremism, intolerance and, most recently, COVID-19. He said there is great scope for cooperation between them on security, politics and economic matters, adding that enhanced interaction would yield a more peaceful and prosperous coexistence.

Abdullah also thanked Pakistan for hosting millions of Afghan refugees for decades, adding Kabul shared in Islamabad’s dream of a dignified return for them.

Minister Qureshi, meanwhile, assured Afghanistan that Pakistan completely supported its peace initiative, adding that Islamabad wanted to be “friends not masters” with the neighboring nation.

“That’s the paradigm shift and the new realization and recognition if we have to coexist in peace and build a common future,” he said. “Security and stability is what we need and our security and stability is interlinked. I want to give a clear message: We have no favorites [and] do not want to meddle in your internal affairs. We respect and want to respect your sovereignty, your independence and your territorial integrity,” he said.

“My message [to Afghanistan] is that whatever consensus evolves through your dialogue and negotiations, we will accept it … that is the way it ought to be,” he said, adding that a political settlement was the only solution to the Afghan conflict. “A realization has evolved over the years that there is no military solution to the Afghan conflict. Today there is recognition that a negotiated political settlement is perhaps the only and the best way forward,” he said.

The foreign minister also warned of “spoilers,” saying that this was inevitable. “But the overwhelming majority feels that this is the right way forward and that is a positive development. We feel, and I believe, that only Afghans can decide the future of Afghanistan,” he said, adding that sustainable peace cannot be imposed.

The foreign minister also stressed the need for greater collaboration between the neighboring countries to build a common future. “The moment we have cooperated, we have benefitted. A relationship of cooperation and understanding is the only way forward,” he said.

“I realize that the road ahead will be bumpy and it won’t be easy. And let’s not fool ourselves, it won’t be handed to us on a platter. One will have to work for it,” he said.

Abdullah, and a high-level committee, are currently in Pakistan on a three-day visit. He is expected to meet Prime Minister Imran Khan and Pakistan Army chief Gen. Qamar Javed Bajwa today.