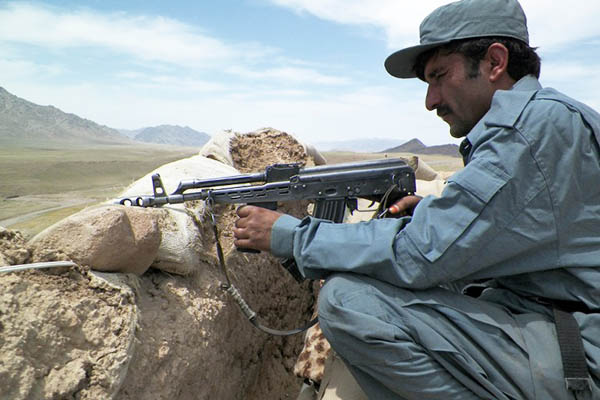 A policeman at a checkpoint on the Kandahar-Tarin Kot highway. Rateb Noori—AFP

Afghan strongmen and warlords are encouraging anarchy to shore up personal power.

The decision to sack an Afghan strongman accused of deliberately handing over parts of a crucial southern highway to the Taliban has laid bare power struggles and tribal feuds within police ranks, worsening insecurity.

Dozens of police checkpoints on the 160-kilometer highway connecting the provincial capitals of Tarin Kot, in Uruzgan, and Kandahar last week fell under Taliban control, raising security alarms. Their loss prompted a chorus of allegations that they were deliberately surrendered on the orders of Rahimullah Khan, a local powerbroker and deputy Uruzgan police chief.

Rahimullah has since been summoned to Kabul and will be dismissed, multiple sources told AFP, including General Abdul Raziq, the powerful police chief of Kandahar who is leading the fight to wrest back control of the highway—a regional economic and military lifeline.

“With Rahimullah there have been a lot of complaints that he intentionally gave up security posts… in an effort to undermine [his superiors] and to strengthen his own position,” said Martine van Bijlert, co-director of the Afghanistan Analysts Network. “But the cost of destabilizing the area so overtly could be very high.”

Fears loom that Rahimullah’s removal could trigger a violent backlash from his Popalzai tribe, which dominates security ranks. Sources inside the interior ministry in Kabul said they are beefing up security in Uruzgan before news of his dismissal spreads.

Rahimullah’s rise and downfall encapsulates the challenges Kabul’s Western-backed government face in reigning in warlords and strongmen sowing anarchy for private gain. It also reflects the struggle to secure remote provinces such as Uruzgan, where Australian, Dutch and American troops fought for years.

The fall of outposts is becoming a woefully familiar pattern in Uruzgan—a remote, mountainous province straddling drug-smuggling routes that is teetering on the brink of collapse as insurgents encircle Tarin Kot.

The Taliban’s resurgence in the area is blamed in large part on what security officials and observers call Rahimullah’s Machiavellian maneuvers to cling to power. In recent months scores of outposts fell in Khas Uruzgan, Charchino and Dehrawud districts as rumors swirled of a government decision to oust Rahimullah from his post, security officials said.

Last year, dozens of other outposts across Uruzgan fell within days of the mysterious assassination in Kabul of his influential elder brother Matiullah, the police chief who kept an iron grip on the province. Many policemen walked from their posts, ceding weapons and territory to the Taliban as Kabul sought to block the appointment of Rahimullah to replace him.

In a compromise, Kabul eventually appointed him as deputy police chief despite his lack of formal military experience or basic literacy.

Authorities have played musical chairs with a permanent replacement for Matiullah, and there is currently an acting police chief in place. “A government delegation this month visited Uruzgan and identified Rahimullah Khan as a key source of strife in the area,” a top provincial official told AFP, requesting anonymity as he was not authorized to speak to the media. “They recommended his immediate dismissal to the interior ministry, which accepted the proposal. But they are treading carefully as he remains influential among his supporters.”

Rahimullah was not reachable for comment and his sub-commanders stressed that the highway outposts were not surrendered without a fight. “We fought for 11 days without any support. We ran out of drinking water and my men were drawing up the engine coolant water of police vehicles to survive,” said commander Pacha, one of Rahimullah’s men. “The Taliban have laser-guided guns and it’s hard for us to fight with our antiquated weapons at night. We had no choice but to run for our lives once the Taliban destroyed our post.”

Strongmen allied with Rahimullah’s Popalzai tribe, a minority in Uruzgan, openly tout the police force as something of a family heirloom and warn of repercussions if he is dismissed. “There will be bloodshed inside Tarin Kot if the government goes ahead with his dismissal,” warned Haji Khoda Raham Khan, a prominent tribal leader and Rahimullah’s uncle. “This is a conspiracy to take back power from Popalzais. Without Rahimullah there will be anarchy,” he said.

Since the Taliban were toppled from power in 2001, Uruzgan has been largely run by powerbrokers allied to Popalzais, prompting recriminations from other dominant tribes. Police outposts straddling the Kandahar-Tarin Kot highway, now riddled with Taliban mines, fell after Raziq demanded control of part of the roadway that runs through his province, officials close to him told AFP.

Raziq, the most powerful police commander in southern Afghanistan is from the Achakzai, the largest of tribes in the region. “The Taliban are taking advantage of the negative rivalry between commanders, plunging our country into chaos,” said Uruzgan Governor Mohammad Nazir Kharoti. “The government cannot serve the interests of one person alone.”