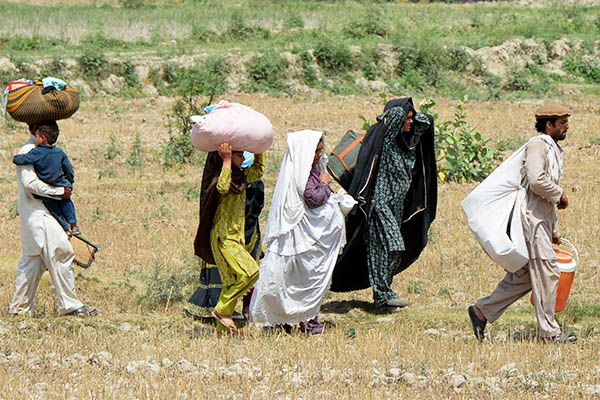 At least 4,000 families have returned to Afghanistan, with reports of at least 800 Pakistani families also seeking refuge across the border.

As thousands of tribesmen from North Waziristan flee to Bannu ahead of an expected surge in the Pakistan military’s planned offensive against militants, at least 4,000 Afghan families have returned to Afghanistan.

“Political authorities have advised all Afghan families residing in North Waziristan to leave the agency as early as possible and return home,” said Siraj Ahmed, the political agent. “The decision was taken as there is a possibility that the militants might use them as human shields or as cover to escape to Afghanistan during Zarb-e-Azb,” he added.  “We are providing every assistance to all Afghan families for their safe return to Afghanistan,” he said.

“Afghan authorities have yet to prepare a final report but up to now they have provided assistance to 818 Pakistani families,” an official responsible for monitoring the displacement on the Afghan border told AFP. Authorities in the eastern Afghan province of Khost have set up a camp to provide displaced people with food and other essentials, the official added.

Akbar Zadran, a senior government official in Khost said by telephone that 1,000 Pakistani families had been registered by Thursday while thousands more had taken shelter with the local population.

Prime Minister Nawaz Sharif chaired a high level security meeting on Thursday in which it was agreed that “operational success in North Waziristan is linked with national unity, peace and stability, and there is a need to extend full support to our jawans in the combat areas.” In a statement issued after the meeting, the prime minister said: “Pakistan is fighting a defining battle in the nation’s history and Insha Allah the terrorists will be defeated.”

At least 23 militants were killed during the fifth day of Operation Zarb-e-Azb, according to an ISPR statement. “Military gunship helicopters today participated in a targeted operation against hideouts of militants on the southern hills of North Waziristan,” it said. “Fifteen militants were killed in airstrikes,” it said, adding, “Eight Uzbek terrorists were also killed while they were planting explosives on the road linking Miranshah to Mir Ali.”

The public relations arm of the Pakistan military also confirmed that 167 militants had been killed in the ongoing military operation.