Afghans Must Decide Future of Their Nation: Qureshi 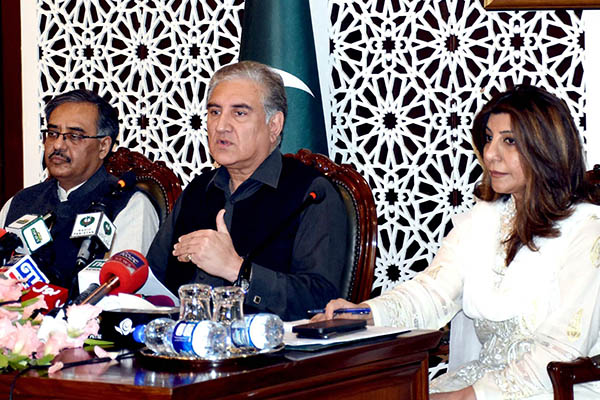 Pakistan’s foreign minister warns against ‘spoilers’ to peace process a day after signing of deal between Taliban and the U.S.

Pakistan has always supported the Afghan peace process, but decisions on how to implement and sustain it for the future of Afghanistan will have to be taken by the denizens of the war-torn state, Pakistan’s Foreign Minister Shah Mehmood Qureshi said on Sunday.

Addressing a press conference in Islamabad following his return from Doha, where he represented Pakistan at the signing of a peace deal between the Taliban and Washington, Qureshi congratulated the signatories for the peace push. However, he warned, the risk of ‘spoilers’ could not be dismissed.

“We cannot neglect it. Spoilers are there, both in Afghanistan and outside Afghanistan. All of you will have to keep strict vigilance on those spoilers,” he said, adding he had also urged U.S. Secretary of State Mike Pompeo to devise a mechanism to identify and hold to account any “spoilers” seeking to play a negative role in the Afghanistan peace process.

The foreign minister said intra-Afghan dialogue should not be delayed unnecessarily and hoped political uncertainties within Afghanistan would soon be addressed to ensure they did not derail the process. Washington, he added, should step up and mobilize support and resources for post-conflict reconstruction of Afghanistan. This would also enable the repatriation of refugees currently based in Pakistan, he said.

Discussing Pakistan’s role in helping the Taliban and the U.S. achieve a peace deal, Qureshi said the leaders of various countries had lauded Pakistan’s facilitative role in the peace process—including those who had criticized the country in the past. He said Pakistan had been facilitating the peace process in its own interests, reiterating the belief that Islamabad would be a net beneficiary of the peace deal, as it would enhance the bilateral economic activity besides paving the way for completion of various projects such as TAPI and CASA-1000.

The foreign minister said Pakistan had successfully dismantled terrorist networks, restored peace after years of terrorism, merged the tribal areas with Khyber-Pakhtunkhwa province, ensuring better of health and education facilities for the areas. He said fencing of the Pak-Afghan border was ongoing, adding that once it was completed Pakistan would be able to fight and keep vigilance on anti-state forces more effectively.

Qureshi said he had asked Pompeo to maintain the positive momentum of the peace process by following through on various confidence building measures such as the release of prisoners, as committed in the agreement. He hoped Afghan President Ashraf Ghani would act “prudently” and not overlook the importance of optics in this process.

During his press conference, Qureshi also briefed journalists about his meetings with the counterparts from the Central Asian States, Turkey, Norway and the secretary-general of the Shanghai Cooperation Organization. He stressed for the enhancement of regional connectivity and trade cooperation.

To a question about the situation in Kashmir, he said the world’s mindset was changing toward what was happening in India-Occupied Kashmir. World leaders and parliaments are now speaking up and criticizing the situation in the occupied valley as well as in New Delhi, he added.