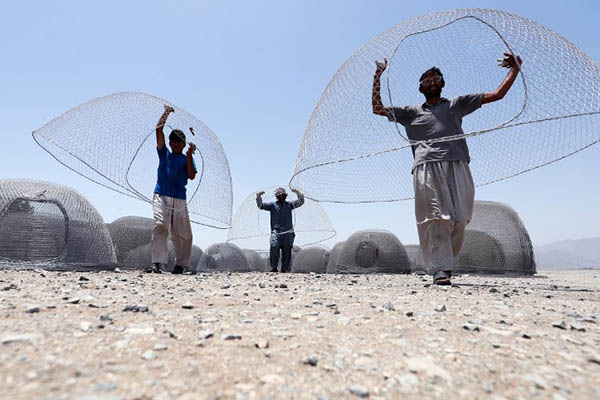 Residents of Kalba, on the Gulf of Oman, weave fishing cages that help them

Far from his home in Afghanistan, Nour rises each morning before the sun’s rays touch the coastal Emirati town of Kalba for a new day weaving fishing cages. The 50-year-old takes his place alongside fellow laborers, praying toward the holy city of Mecca. Then he sips on his first cup of tea, a moment of serenity before work begins.

Kalba is located on the eastern coast of the United Arab Emirates. Unlike the capital Abu Dhabi 200 kilometers west, which faces the Arab Gulf states, Kalba is perched on the Gulf of Oman, looking out toward Pakistan and India beyond.

The town has become a hub for the craft of weaving fishing cages, attracting dozens of Afghans and Pakistanis seeking to earn a living in the calm and oil-rich Gulf nation.

The fishing cage, or wire net, used in the Gulf of Oman is shaped like an igloo, with an oval-shaped inlet. The popular Shaeeri and Zoubedi fish can swim in through the narrowing passage, but cannot find their way out. “Each cage takes about seven or eight hours of non-stop work,” Nour explains.

The Afghan father of three is a long way from his family and his landlocked hometown of Khost, located near the Pakistan border. “I’ve been working here for nine years,” he says.

Nour says he earns 25 dirhams (about $7) per fishing net, of which he makes one or two each day. Despite the long tedious hours, sometimes oppressive heat, and relatively low financial returns, Nour stays.

“I’m happy because I can make money to send to my family at the end of each month,” he says. He is not alone.

For decades, the U.A.E. has attracted hundreds of thousands of Afghans, Pakistanis, Filipinos and other Asian nationalities willing to do manual labor that the wealthy local population is not. The industrial zone in Kalba is home to about 50 small enterprises, Emirati-owned and employing about a dozen weavers each.

The weavers, aged 18 to 60, work in their own open spaces with thatched roofs to shield them from the sun. There are no days off. Instead, every two years, workers are given a ticket home for a six-month unpaid break.

For many, it is too long a time to go without work, but it is a requirement tied to local labor laws.

Making the traps is a craft, as the worker must simultaneously grip and tie fine wires together evenly and very quickly to prevent the entire structure from collapsing before it is finished. To avoid injury, the men tie pieces of cloth or fine aluminum around their fingers.

The only sound in this sleepy weaving community is the sound of Afghan or Pakistani news bulletins on small TV sets, or music played on mobile phones.

Herat, 30, sits on a chair listening to music from his native Afghanistan under the straw awning. He faces a mirror to keep an extra eye on his net progress.

“This small fan gets me through the heat of the summer,” said Herat, deftly manipulating the thin wires. He says the temperature can rise to 50 degrees Celsius. “The heat doesn’t stop us from working,” says Herat, who has lived in Kalba for three years.

Akbar, a 55-year-old father, says he arrived in Kalba three decades ago from his native city of Peshawar in Pakistan. As he nears completion of his trap, Akbar says he plans to stay a few more years before returning to his country.

“It is true that my hair is going grey, but I still feel like a young man,” he says. “In any case, there is no work in Pakistan.”

Suddenly, Akbar stands up, grabbing a blue rope tied to the ceiling. He takes two steps back and leaps over the meter-high cage—making a perfect landing in the unfinished trap. “It’s been 30 years and I still do this jump every day,” grins Akbar, to the applause of nearby workers.

As the sun goes down, the sandy path through this small laborers’ community is lined with the day’s finished cages.

But Nour doesn’t stop working until just before midnight. He sips a final cup of tea as he checks his net-making progress for the month, finally retiring for the night in the adjoining sleeping quarters.

Nour, his dark beard peppered with grey, says he will only leave Kalba if he finds a job in his troubled home country. “I will leave when I am old,” he says.