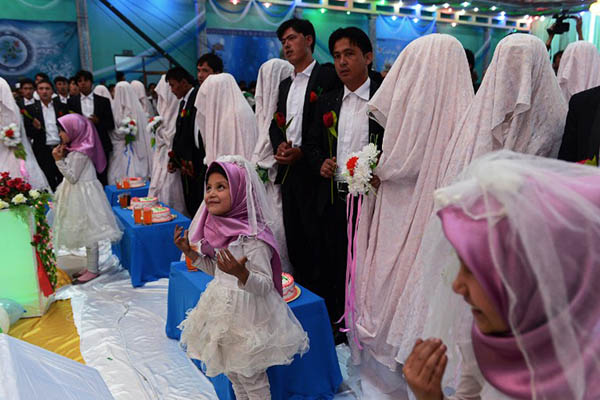 Charity organization says couples from poor families are seeking their help to get married without spending lavish amounts.

The crowd bursts into applause as 100 couples enter the hall, hand in hand, grooms in simple black suits and brides in modest white dresses, red flowers in hand. Expensive, lavish weddings have boomed in war-torn Afghanistan in recent years, but some young couples are now bucking the trend and saving money by getting hitched in low-cost mass events.

A sign at the entrance of the hall where the happy couples tied the knot in the large-scale ceremony arranged by religious charity Abul Fazel read: “Blessed is the woman who is easily maintained.” There was no dancing and the guests were entertained with poetry, stage shows, songs by young girls—and a few topical jokes aimed at Afghanistan’s turbulent political year.

“Put in all your energy and clap hard so they can come in all at once—we don’t want a second round of applause like the second round of elections,” a presenter on stage told the cheering guests as the couples were entering the hall. “We want to finish everything in the first round happily, because there won’t be any John Kerry to solve your problems later,” the presenter joked.

The Taliban banned showy weddings during their hardline 1996-2001 rule, but since the U.S.-led invasion ousted them, billions of dollars have flooded Afghanistan’s economy and the taste has grown for more and more extravagant weddings. Showy limousines, huge wedding halls, multiple receptions and parties with hundreds of guests have become almost compulsory.

A single wedding day at a hall in Kabul can now cost between $10,000 and $20,000—a gigantic sum in one of the world’s poorest countries. For the country’s small, rich elite this may not be a problem, but less fortunate couples find themselves under huge pressure to keep up. For those who are postponing marriage because they feel unable to put on a big enough show, the cheaper mass alternative is highly appealing.

“I was engaged for two years, I really could not afford a big wedding party. And then I heard about this organization through media. I registered and today I am getting married,” said Mujtaba Rahimi, 24, a journalist sitting beside his bride. “It is not an extravagant party, it is more spiritual. I hope more couples are wedded through such weddings and this becomes common in Afghanistan,” he said.

In Afghanistan, a country battered by nearly 40 years of war and whose economy is still largely reliant on foreign aid, it is the groom who traditionally pays for the wedding. It also falls to the groom to pay for parties before and after the big day itself, buying jewelry for the bride and paying huge amounts as dowry.

Musa, 29, a civil servant who had been engaged for three years but could not afford a big wedding party, said people should be encouraged to cut wedding costs as the high cost of weddings prevent youth from getting married. “Expensive marriages prevent people from marrying. The young couples should find other ways to marry such as mass weddings. I ask all the youth to stop spending thousands only for one night,” he said.

Hassan Nazeem, from the charity organization that hosted the mass wedding, said it had cost around $66,000 to organize, including home appliances as gifts for the newlyweds, and the party for around 3,000 guests. He said the scheme was growing in popularity.

“This is the second time that we are holding such weddings. Last time 44 couples were wedded in a mass wedding. This time it is 100 couples all from poor families,” he said. “We make announcements through mosques and elders. And then the couples who cannot afford for their wedding parties come and register to get married,” he added.

And it was not only the money-saving grooms who enjoyed the mass service. Shy bride Fatima, 19, her face covered by a veil, gave her approval. “I’m very happy today to get married. I hope these kind of weddings continue to happen so that young couples can start their new life,” she said.

Sayed Baqir Kazimi, another organizer, said mass weddings and straightforward marriages would reduce “moral crimes”—code for extra-marital sexual relations, deeply taboo in conservative Afghanistan. “One of the problems that our youth face these days is the expensive weddings that will even force them to become criminals. Easy and inexpensive weddings are the only solution for this problem,” he said.

The matrimony industry has boomed since the fall of the Taliban, who even banned music from weddings. But where government efforts to clamp down on outlandish weddings have had little impact, the mass wedding movement seems to be making a dent. “We already have around 200 other couples on our waiting list.” Nazeem added.