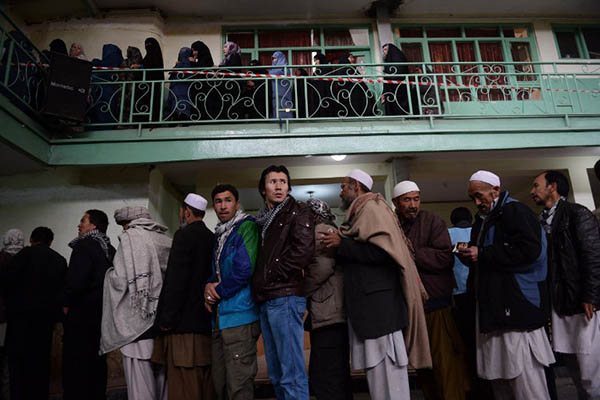 Afghan men and women wait to vote at a polling station in Kabul. Shah Marai—AFP

Afghan voters went to the polls Saturday to choose a successor to President Hamid Karzai, braving Taliban threats in a landmark election held as U.S.-led forces wind down their long intervention in the country.

Security was tight as polls opened at 7:00 a.m. after extremists rejected the election as a foreign plot and urged their fighters to attack polling staff, voters and security forces.

Afghanistan’s third presidential election brings an end to 13 years of rule by Karzai, who has held power since the Taliban were ousted in 2001, and will be the first democratic handover of power in the country’s turbulent history. The NATO coalition force is pulling out its last 51,000 combat troops this year, leaving Afghan forces to battle the resilient Taliban insurgency without their help.

Poll security is a major concern following a string of high-profile attacks in Kabul, most recently a suicide bombing at the Interior Ministry on Wednesday that killed six police officers. Interior Minister Omar Daudzai said all 400,000 of Afghanistan’s police, army and intelligence services were being deployed to ensure security around the country.

But there were no major incidents in the first two hours of polling on Saturday and preliminary observations suggested stronger turnout than in 2009, when only around a third of eligible voters cast their ballots.

In Kabul, hundreds of people waited in cold wet weather to vote amid stringent security, despite the insurgents’ promise of violence. “I’m not afraid of Taliban threats, we will die one day anyway. I want my vote to be a slap in the face of the Taliban,” said housewife Laila Neyazi, 48.

Shopkeeper Khodadad, 52, said he had brought 12 family members to vote. “It feels good that now people can choose their leader by voting, not by gun and force,” he said. “We are tired of tyrants and war and violence—voting is the best way to choose your future leader.”

Around 13.5 million people are eligible to vote from an estimated total population of 28 million, with polls due to close at 4:00 p.m. Karzai, who is constitutionally barred from standing again, voted for his successor at a school near the presidential palace in Kabul. “I urge the Afghan nation to go to the polling stations despite the rain, cold weather and enemy threats … and to take the country another step toward success,” he said.

As well as the first round of the presidential election, voters will also cast ballots for provincial councils. The frontrunners to succeed Karzai are former foreign minister Zalmai Rassoul, Abdullah Abdullah—runner-up in the 2009 election—and former World Bank academic Ashraf Ghani. All three voted soon after polls opened.

There is no clear favorite and if no candidate wins more than 50 percent of the vote in the first round—preliminary results for which will be announced on April 24—a run-off is scheduled for late May. Massive fraud and widespread violence marred Karzai’s re-election in 2009 and a disputed result this time would add to the challenges facing the new president. Whoever emerges victorious must lead the fight against the Taliban without the help of more NATO troops, and also strengthen an economy reliant on declining aid money.

The election may offer a chance for Afghanistan to improve relations with the United States, its principal donor, after the mercurial Karzai years. Ties fell to a new low late last year when Karzai refused to sign a security agreement that would allow the U.S. to keep around 10,000 troops in Afghanistan to train local forces and hunt Al Qaeda.

The eve of the poll was overshadowed by the killing of award-winning Associated Press photographer Anja Niedringhaus, shot by a police commander in eastern Afghanistan. Niedringhaus, 48, was the third journalist working for international media to be killed in Afghanistan during the election campaign, after Swedish journalist Nils Horner and Sardar Ahmad of Agence France-Presse.