Home Culture African Lions Are ‘Endangered,’ Must be Protected: U.S.

African Lions Are ‘Endangered,’ Must be Protected: U.S. 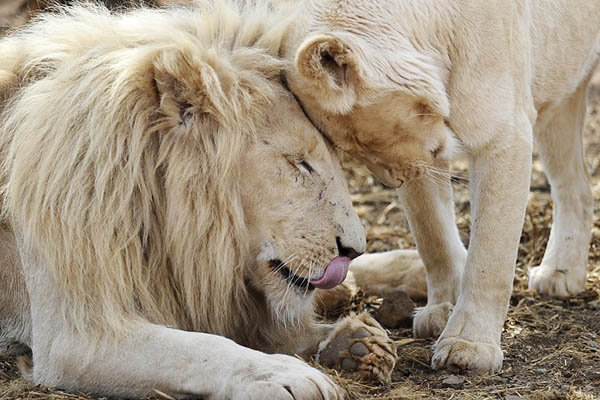 Authorities say certain kinds of west African and Indian lions will be protected under U.S. law.

African lions are at risk of extinction and will be protected under U.S. law as an endangered species, authorities declared Monday, months after a high-profile killing stoked global outrage.

Certain kinds of the iconic big cats of west Africa and India are now considered endangered because they are in “dramatic decline,” the U.S. Fish and Wildlife Service said. The decision, which follows the killing of Cecil the lion in Zimbabwe by an American dentist earlier this year, will pave the way for stricter regulations on the import and export of lion carcasses.

“Today we are telling the lion’s side of the story,” said FWS director Dan Ashe.

The added protection extends to a subspecies of lion known as Panthera leo leo, which now numbers only about 1,400 individuals—900 or so in western and central Africa and about 500 in India. Another type, known as Panthera leo melanochaita, is considered “threatened,” with between 17,000 and 19,000 of the animals found across southern and eastern Africa, the FWS said.

The decision does not ban hunting them altogether, but “raises the bar significantly” for those who want to apply for a lion hunting permit, Ashe told reporters.

Lion populations have declined 43 percent in the last two decades due to habitat loss, difficulty finding prey, and increasing conflicts with the growing human population. “The lion is one of the planet’s most beloved species and an irreplaceable part of our shared global heritage,” said Ashe. “If we want to ensure that healthy lion populations continue to roam the African savannas and forests of India, it’s up to all of us—not just the people of Africa and India—to take action.”

The move was hailed by animal rights groups and conservationists. It is “likely to dramatically change the equation for American trophy hunters who have been killing animals by the hundreds each year for their parts,” said Humane Society of the United States president Wayne Pacelle. “American trophy hunters are directly responsible for slaughtering at least 5,647 lions in the last 10 years, according to import data we’ve mined from the FWS.”

Meanwhile, John Robinson, chief conservation officer at the Wildlife Conservation Society, said the move was “necessary to allow the recovery of one of the most iconic top predators on the planet.”

Speaking to reporters on a conference call, Ashe explained that those who have violated wildlife laws in the past will not be granted future licenses to hunt lions.

The U.S. government is also seeking to make it more expensive to obtain a lion hunting permit. “As we have seen in the drastic decline of lion populations, it is the responsibility of the hunting industry and the American hunter in particular to do better,” he said.

Ashe stressed that he was not referring to any specific transgressions by American hunters but to the “overwhelming body of science that shows lions are endangered or threatened with extinction and we need to change the curve.” He added that the science shows an enormous loss of life among lions and a failure of current conservation efforts to preserve their numbers.

The rule goes into effect in 30 days.

Experts estimate there were about a half million lions at the start of the 20th century. That number declined to about 200,000 by mid-century, and has fallen to about 10 percent of that number today, largely due to increasing conflicts between the animals and the encroaching human population in sub-Saharan Africa, Ashe said.