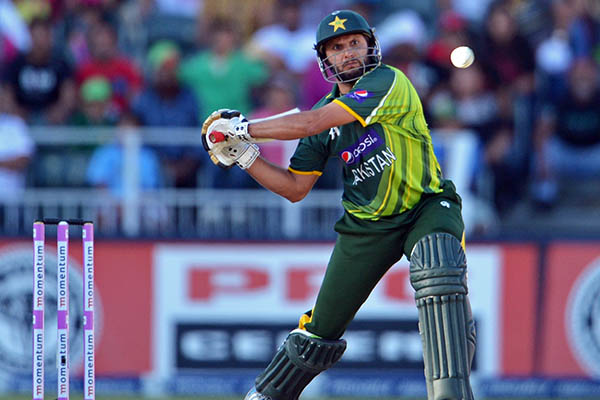 Shahid Afridi made one of the more remarkable comebacks in international cricket in leading Pakistan to a crushing 126-run victory over the West Indies in the first one-day international at the Guyana National Stadium on Sunday.

Omitted from Pakistan’s failed Champions Trophy campaign, the mercurial all-rounder returned the best-ever ODI bowling figures by a Pakistani, and the second best overall, in snaring seven for 12 to rout the home side for just 98 off 41 overs after having top-scored with a typically swashbuckling 76 in the visitors’ total of 224 for nine.

“I try hard and I back myself and I want to thank people back home,” said Afridi. “It’s not time for me to just survive in the team, but to give a lot to the team. I tried to stay positive. Whenever I got the ball in my zone I went for it. And what a pitch it was for me to bowl on. I just kept it simple, and it worked.”

This match represented yet another stunning spike in the 17-year international career of Afridi whose ability to delight and entertain with his extravagant manner has often been overshadowed by an almost chronic failure to deliver at the most critical of times.

Fortunately for Pakistan, this was not one of those times and his impact on the match started with his domination of a 120-run sixth-wicket partnership with his captain, Misbah-ul-Haq (52), the pair rescuing their team from the depths of 47 for five after gangling fast-medium bowler Jason Holder had wrecked the top order in finishing with the excellent figures of four for 13.

While Haq labored toward yet another workmanlike half-century, occupying 121 deliveries, Afridi’s knock was a hurricane by comparison, decorated by five sixes and six fours off just 55 deliveries. He looked well on the way to completing a hundred but perished in the 39th over, caught by Darren Sammy at deep midwicket off the bowling of Kieron Pollard.

West Indies would have been expecting the likes of Pollard and fellow big-hitter Chris Gayle to produce similar innings to give their team a fighting chance of getting the 225 runs needed for victory. However, that hope never materialized, and while Afridi took most of the glory with his demolition job, Mohammad Irfan did the early damage.

In overcast, seamer-friendly conditions, the giant left-arm pacer disconcerted the top-order of the West Indies with his speed and trajectory from such a great height, bowling Johnson Charles with a swinging full-toss and then forcing Darren Bravo to glove a lifting delivery on the body for wicketkeeper Umar Akmal to take the catch down the leg-side.

Pakistan then got a huge boost when new batsman Marlon Samuels called Gayle for a sharp single and Misbah’s direct hit from cover found the dangerous opener short of his ground and the West Indies wobbling badly at seven for three.

All the support bowlers maintained the pressure and when Afridi came on as the fifth change, the floodgates really opened.

Unable to cope with his cocktail of top-spinners and googlies, a succession of batsmen ill-equipped mentally and technically to cope with such wiles succumbed without much of a fight as five wickets crashed for 14 runs.

Only Samuels (25) showed any meaningful resistance, but it was never going to be enough against a rampant Afridi, who finished off the match by trapping Holder, the early destroyer for the West Indies, palpably LBW.

“We were let down by the batting yet again,” said West Indies captain Dwayne Bravo. “Holder bowled so well, and while we have to give credit for the way Afridi and Misbah batted, that total was gettable, but we buckled under pressure.”

Boom Boom proved that how much necessary he is for Pakistan cricket.. His performance with the bat in a very difficult condition where ball was not coming to bat properly and UN even bounce in the pitch was brilliant. He scored 76 on 55 balls with a SR of 138 has shown that nothing matter for him… Later on his bowling was absolutely stunning, He bowled leg breaks, drift the ball and also bowled wrong ones and hence proved that there is still a lot of cricket alive in him…