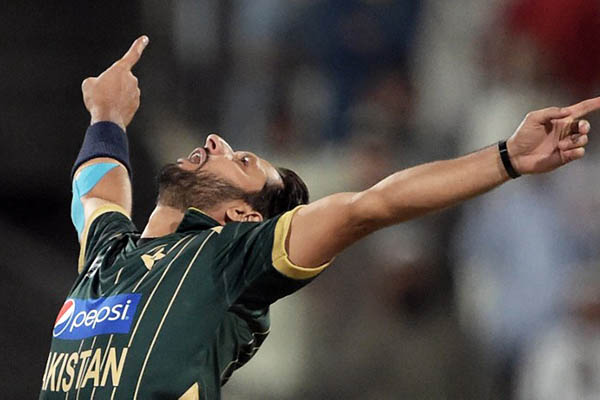 All-rounder says he will continue to play Twenty20 tournaments until 2016.

All-rounder Shahid Afridi announced Sunday he would retire from one-day cricket after next year’s World Cup but continue to play Twenty20 until 2016.

The 34-year-old led Pakistan for the last three one-day internationals in the series against New Zealand, which they lost 2-3 against the Kiwis this month, after regular captain Misbah-ul-Haq was ruled out due to injury. He smashed a match-winning 61 in the first match and followed that up with 55 and 49.

“I will retire from one-day cricket after the World Cup,” Afridi told a press conference. “I wanted to leave on the peak. I think it’s the right time to leave so that my place goes to a youngster and there are very talented players in Pakistan.”

Australia and New Zealand will co-host the World Cup from Feb. 14 to March 29.

Afridi hit the fastest one-day 100 off just 36 balls in only his second match against Sri Lanka in Nairobi in 1996, a record that New Zealand’s Corey Anderson broke earlier this year. Anderson made a 35-ball 100 against the West Indies.

Afridi holds the record for most sixes in one-day internationals with 342, and is the only player to have hit more than 400 sixes across all three formats of the game. He has hit 49 sixes in Twenty20 cricket and 52 before his retirement from Tests in 2010.

As a leg-break bowler he has 391 wickets in 389 one-day internationals. His tally of wickets in Twenty20 cricket stands at 81. “My journey has seen many ups and downs but now I am feeling satisfied that I am leaving on my own terms,” Afridi said. “People don’t know, but international cricket is tense all the time,” said Afridi, whose ambition is to complete 8,000 runs and 400 wickets. He currently has 7,870 runs in one-day cricket.

“I want to win the World Twenty20 in India in 2016 before quitting international cricket,” said Afridi.

Afridi led Pakistan to the World Cup semi-final in 2011 before being removed after he fell out with then-Pakistan Cricket Board chairman Ijaz Butt and coach Waqar Younis.