After Pakistani Prisoner Is Attacked in Indian Jail, Protests 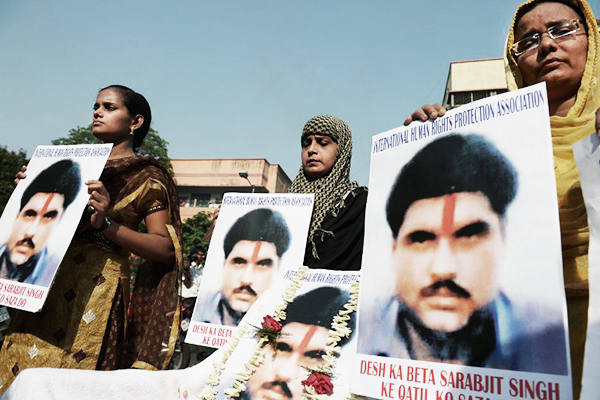 Some 200 people took to the streets in Pakistan-administered Kashmir on Saturday to demonstrate against an attack on a Pakistani prisoner in India.

The protesters marched in Muzaffarabad, capital of Pakistan-administered Kashmir, against the attack on Sanaullah Ranjay. The crowds chanted slogans against India and called for “jihad” to force Indian troops out of Kashmir. They burned the Indian flag and demanded Ranjay be repatriated to Pakistan.

Ranjay is being treated in the north Indian city of Chandigarh, where he remains in critical condition on a ventilator. Ranjay—a convicted murderer—was assaulted early Friday in the northern city of Jammu, a day after India’s home ministry ordered stepped-up security for jailed Pakistanis. The attack came after Indian prisoner Sarabjit Singh, convicted in Pakistan for spying and deadly bombings, died on Thursday following a savage beating in a Lahore prison, sparking a furious response from Indian politicians.

Meanwhile, authorities in Pakistan-administered Kashmir announced a day of mourning to protest the attack. “We will observe a day of mourning on Monday and will demonstrate in front of the United Nations’ office to register our protest against the attack on Ranjay,” Chaudhary Abdul Majeed, Prime Minister of Pakistani Kashmir, said in a statement. “We will also stage rallies in [India-administered Kashmir] and Pakistani Kashmir, and in all major cities.”

“We are in favor of an action against those who tortured Sarabjit Singh. But there is no justification for Indian propaganda [on this issue],” he said, adding that India should review its own acts and should not promote terrorism in Pakistan. “Sarabjit Singh admitted in the courts that he is responsible for the bomb blasts and that he was formally supported by India for these blasts. He has taken the lives of so many people,” he said. “We don’t think that torture in jail is a right thing. Nobody should take the law in [their] hands. But there is no justification for that noise in India at this moment. India should correct its own acts.”

Singh was cremated with state honors on Friday in his native village in northwestern India where hundreds of angry demonstrators shouted “Down with Pakistan!” as they gathered to pay their tributes. The prison violence and resulting protests are likely to cause further friction between India and Pakistan, whose ties were hit by a border flare-up earlier this year that undermined efforts to build trust.