After Promises from Islamabad, the Shia End Nationwide Protests 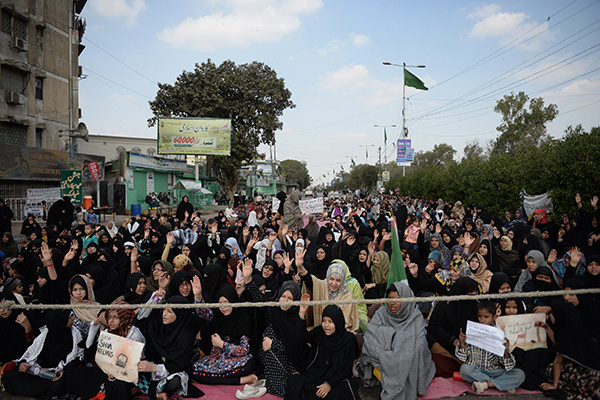 One of the protests in Karachi, Jan. 23. Asif Hassan—AFP

Leaders of the Hazara Shia community in Quetta called off their protest Thursday night after two federal ministers, including interior minister Chaudhry Nisar Ali Khan, met with protestors in the provincial capital and vowed to launch a “targeted operation” against terrorists targeting the Shia.

The protests—which also broke out in Karachi, Lahore, Rawalpindi, and Multan—followed the killing of Shia pilgrims in a bus bombing in Mastung on Jan. 21. Thousands of protestors in Quetta braved the cold and refused to bury their dead unless the federal government acted against those, including the Lashkar-e-Jhangvi, who are mercilessly targeting the Shia.

Abdul Khaliq Hazara, chairman of the Hazara Democratic Party, said after the negotiations with Khan that the demonstrators had agreed to end their protest. “We thank all the people who held protest demonstrations across the country to express their solidarity with us and we appeal to them to end their protests peacefully,” he said, standing alongside interior minister Khan. Hazara added that the dead would be buried Friday morning.

Khan said a targeted operation would be conducted against those behind the Mastung bombing. “We will bring the terrorists to book,” he told the grief-stricken gathering, saying all efforts would be made to restore law and order in the province. “I stand by the Hazara community in this hour of grief and trial.”