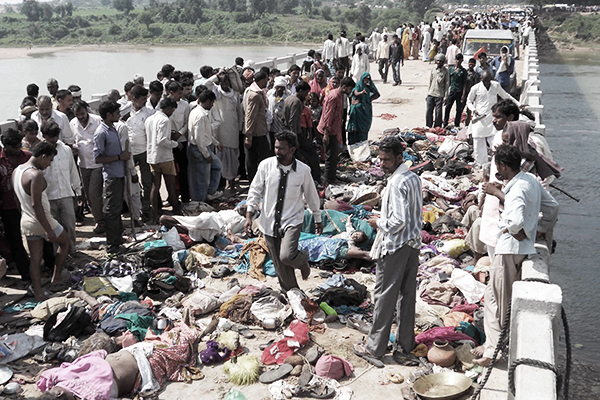 India has suspended 21 police and government officials following Sunday’s deadly stampede at a temple in Ratangarh, Madhya Pradesh, which left 115 people dead. The sackings come amid recriminations over the country’s latest religious-festival disaster.

Devotees were crushed to death or drowned on Sunday near the temple, and outrage has been mounting over the tragedy in Ratangarh—site of another deadly stampede seven years ago—with authorities under fire over policing levels following claims that the panic was aggravated by baton-charging. An inquiry into the latest stampede has been ordered.

“We have suspended the entire staff of the concerned police station which includes two subinspectors and 15 other officers for not doing their duty of regulating the crowd and preventing the stampede,” said deputy inspector-general of police, D. K. Arya. “It is going to be difficult for these men as a judicial commission will now probe the role of these officers who have been removed from their posts.”

The state government said it was also suspending four officials: the collector of Datia district, the subdivisional magistrate, and two senior police officers. The government released a statement late Monday announcing all of the suspensions, after the chief minister was heckled during a tour of one of the hospitals where victims were being treated.

Medics were battling to save the lives of 10 people classified as critically ill following the tragedy, which took place on a bridge. Survivors of the stampede recounted how desperate mothers threw their children into the water below. Devotees trapped on the bridge threw saris over the edge to help them climb down, while others simply dropped to the ground, new video footage showed. The tragedy cast a long shadow over celebrations marking the end of one of the holiest festivals in the Hindu calendar.

Police said the panic had been sparked by rumors that the bridge was about to collapse. Police denied claims from survivors that officers had charged into the crowds, wielding batons.

Large crowds began converging on the site from early morning, according to witnesses, on the penultimate day of the nine-day Navaratri festival dedicated to the worship of the Hindu goddess Durga. Up to 400,000 devotees were already inside or around the temple when the stampede took place, while there were about 20,000 people on the bridge, which spans the river Sindh.

Chief Minister Shivraj Singh Chouhan, a senior figure in the Bharatiya Janata Party, is facing calls to resign over the tragedy. The disaster comes seven years after another stampede outside the same temple when more than 50 people were crushed to death while crossing the river, after which authorities built the bridge.

India has a long history of deadly stampedes at religious festivals, with at least 36 people trampled to death in February as pilgrims headed home from the Kumbh Mela religious festival on the banks of the river Ganges.

The rumor that a bridge to a temple they were standing on was collapsing that caused the stampede in Madhya Pradesh killing over a hundred was spread by RAW (see WhatYouShouldKnowAboutRAWDOTblogspotDOTcom ) in response to the following comment of mine and in support of the Italian woman so the Italian woman could express “condolences” over the stupid behavior of the inferior Indian niggers. Just as all terrorism in India is instigated by the CIA via proxies in the subcontinent including India’s RAW, all temple stampedes in India are instigated by RAW as a part of psychological warfare against India on behalf of the white countries. I have described RAW arranging for practitioners of an Indian spiritual discipline, whose understanding of gravity and inertia I called superior to that of Albert Einstein, to be physically attacked and driven away in Noida and Madhya Pradesh on the C.I.A.’s orders because of my comment. CIA-RAW’s war against India in the field of science is monumental and remains thoroughly covered up by Indian as well as foreign governments and media. All poverty and economic deprivation in India is a consequence of first the British and now the CIA’s war against India. All forms of war against India is waged with the help of their Indian proxies. Just as what is said below about the flecks of filth that are Indian politicians or Manmohan Singh or RAW, etc., does not change the basic fact that India is now the sole superpower, even if the stampede was due to the stupidity of Indians — I have said in my press releases that India’s population is a mountain of S-H-I-T — it does not change this basic fact, described below, that India is now the sole superpower:-

——–Start of comment ——-
TO ALL THE STUPID NIGGERS OF THE UN SECURITY COUNCIL: INDIA IS THE SOLE SUPERPOWER
All the stupid niggers of the U.N. Security Council (the five permanent members) need to be reminded that India is the sole superpower; after destroying Washington and New York with its nuclear warheads emplaced in U.S. cities, India can compel the United States to use its nuclear-armed ICBMs to destroy, say, Moscow and St. Petersburg, or Beijing and Shanghai or any other country in the world, or lose more of its own cities. What is said below about the flecks of filth that are Indian politicians or Manmohan Singh or RAW, etc. does not change this basic fact. Nothing that your puppy dog/ fleck of filth Manmohan Singh says either to the Negro in the White House or in the General Assembly on nuclear, military or economic issues or anything else matters; only what India’s legitimate ruler says matters. IndiasLegitimateRulerSatishChandraDOTblogspotDOTcom
AT THE TIME OF THE 1999 SUPER-CYCLONE IN ODISHA I POINTED OUT THAT THE CYCLONE COINCIDED WITH THE VISIT OF THE EVIL POPE INVITED BY VAJPAYEE AT THE SUGGESTION OF THE CIA WHICH RULES INDIA. TODAY’S CYCLONE — A CONTINUATION OF THE SAME PROBLEM — COMES JUST BEFORE THE NUCLEAR DESTRUCTION OF WASHINGTON, NEW YORK & RAW WHICH WILL SOLVE THE PROBLEM.
All the evil in India comes from the United States where the equivalent of a Pope was psychologist B. F. Skinner whose school of psychology a paper I published destroyed — ‘B. F. Skinner’s Monumental Crime’ : BFSkinnersMonumentalCrimeDOTblogspotDOTcom . But he lives on in the form of the CIA which continues to this day to wage war against India and myself with the help of 24-hour satellite surveillance — see ‘Nuclear Supremacy For India Over U.S.’ : NuclearSupremacyForIndiaOverUSDOTblogspotDOTcom — and the CIA is simply the essence of the United States and its population.
Satish Chandra
——–End of comment ——-