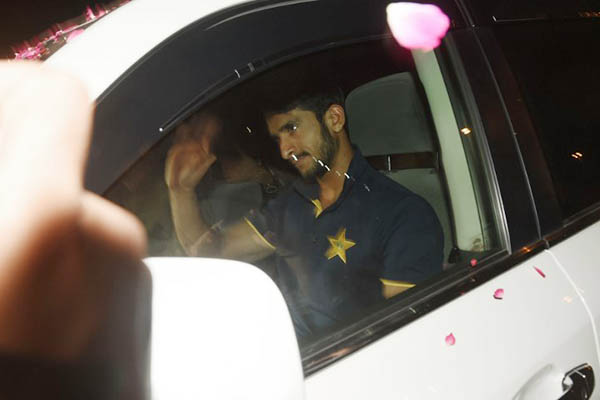 Hasan Ali waves to fans upon his return in Lahore. Arif Ali—AFP

Pakistan captain Sarfraz Ahmed said being named skipper of the International Cricket Council’s team of the Champions Trophy was the “perfect icing on the cake” of his side’s stunning title triumph.

Ahmed’s side thrashed title-holders India by 180 runs in a remarkable final The Oval on Sunday having been the lowest ranked of the eight nations at the outset of this one-day international tournament—which they started with a 124-run defeat by India. It was Pakistan’s first international 50-over trophy since winning the 1992 World Cup.

Wicketkeeper/batsman Ahmed was one of four Pakistan players in the team of the tournament, along with opening batsman Fakhar Zaman, who made a brilliant hundred in the final, and pace bowlers Hasan Ali and Junaid Khan.

“To be appointed as captain of the team of the ICC Champions Trophy 2017, which includes some of the finest and most attractive cricketers of this generation, is the perfect icing on the cake,” said Ahmed in a statement. “But I am more happy and delighted for players like Fakhar Zaman and Hasan Ali, who impressed their peers through their talent and performances, and found their way in the side. These two lads, plus [leg-spinner] Shadab Khan, are the future of Pakistan cricket and I sincerely hope they will only go in the upward direction from here.”

Tamim Iqbal, whose runs did so much to take Bangladesh to the last four of a major tournament for the first time, was also included.

Dhawan and Ali had already won individual trophies for finishing as the most successful batsman and bowler of the tournament respectively.

Ahmed was named as skipper for his inspirational leadership, which included a match-clinching 61-not out during a three-wicket win over Sri Lanka in a virtual quarter-final.

Victories against higher-ranked sides saw Pakistan move up two places to sixth in the MRF Tyres ICC ODI rankings, putting them on course to qualify automatically for the 2019 World Cup in England.

The ICC side was selected by a panel that included former captains Michael Atherton (England), Sourav Ganguly (India) and Ramiz Raja (Pakistan) as well as the Editor of Wisden, Lawrence Booth, and AFP cricket reporter Julian Guyer, with the ICC’s general manager of cricket, Geoff Allardice, the chairman.

ICC team of the Champions Trophy