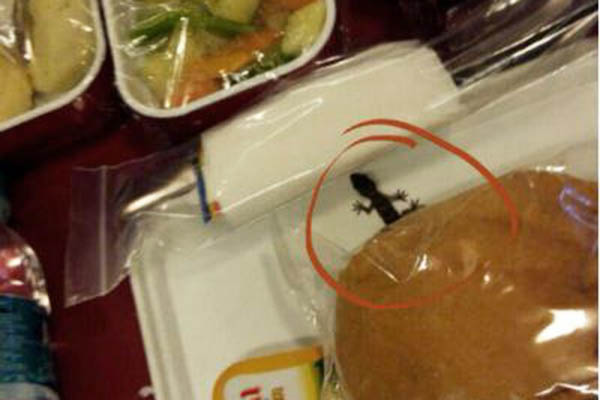 Struggling airline says no passenger has complained about the meal and questions veracity of image.

Air India on Saturday denied it had served a lizard in one of its in-flight meals, just hours after the airline claimed it was investigating the case.

The state-run carrier earlier said it had launched an inquiry into how the lizard got into the meal and was questioning “the caterer and our in-house departments.”

The incident, said to have happened on a Delhi-London flight on Thursday, came to light when a picture started circulating on social media showing the reptile’s head poking out from underneath a bun on a meal tray wrapped in cling film. It was not clear if the animal was dead or alive.

But on Saturday, just hours after Air India said it was investigating the incident, the airline dismissed the accusation as “false and baseless.”

“We are denying any such incident. One because we do not know the authenticity of the photograph and two… no passenger has lodged any such complaint,” an airline spokesman told AFP on the condition of anonymity.

The state-run carrier, which has not reported an annual profit since 2007, has been hit by a string of technical glitches and other embarrassing incidents, including staff turning up late for flights. In April, the airline made headlines when it had to ground two of its pilots after a fight erupted between the pair just before takeoff.