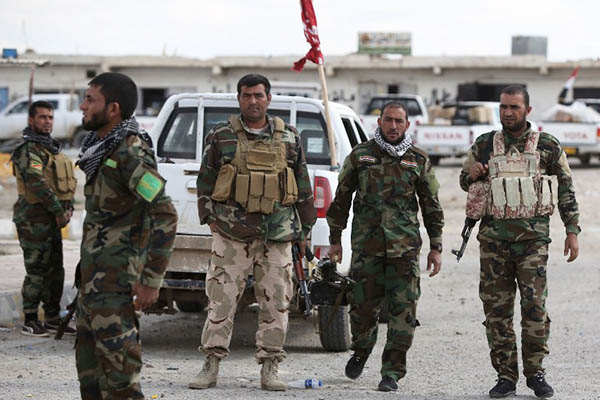 Wary of being seen as cozying up to Iran’s proxies, Washington conditioned its intervention on an enhanced role for regular government forces in the fight against the Islamic State group. The Tehran-backed paramilitary groups that had done the heavy lifting in the Tikrit operation so far threatened to pull out of it completely, accusing the U.S. of “hijacking victory.”

The operation to retake Tikrit was launched on March 2 but had failed to dislodge a relatively small number of I.S. fighters who have hemmed themselves in with thousands of bombs for a last stand in the city center.

“The assault on the last [I.S.-held] pocket of Tikrit started from the southern front, in Awja,” said a brigadier general in the Tikrit area. He said Iraqi forces were also attacking from the west and north and were repairing a bridge over the Tigris that I.S. recently blew up to pile further pressure from the east.

The forces involved in the fighting include the volunteer Popular Mobilization units, Shia militia groups, the army’s counter-terrorism force as well as interior ministry units.

Iraqi airstrikes had, by Baghdad’s own admission, not been good enough to break the back of I.S. resistance. “Now the operation to take Tikrit really begins,” one U.S. defense official told AFP.

The Pentagon has said its technological edge would allow for precision strikes that can spare civilian lives and infrastructure. The exact number of civilians trapped inside Tikrit is unclear but a Red Crescent spokesman last week said “no more than 30,000, probably quite a bit less.”

“The ongoing Iraqi and coalition airstrikes are setting the conditions for offensive action to be conducted by Iraqi forces currently surrounding Tikrit,” Terry said.

The U.S. military said the first wave of coalition air raids consisted of 17 strikes that struck buildings, bridges, checkpoints, staging areas, berms and a command post. Washington had expressed strong reservations over the leading role played in the Tikrit operation by Shia militia groups, some of which have been accused of serious abuses.

Iran’s top commander in charge of external operations, Qassem Suleimani, has been ubiquitous on the Salaheddin front lines and is perceived by many Iraqis as the brain behind Iraq’s ground operations. But the Pentagon insisted Washington remained Baghdad’s most precious partner in the war to reclaim the vast regions of Iraq I.S. conquered last summer.

“Reliable, professional, advanced military capabilities are something that very clearly and very squarely reside with the coalition,” spokesman Colonel Steven Warren said Wednesday. Lloyd Austin, a top U.S. general, said militia groups had already “pulled back” but it was not immediately clear from sources on the ground where.

The militias vehemently criticized Baghdad’s decision to call for U.S. help and held meetings among themselves to decide on the future of their involvement in the Tikrit assault. “This operation [U.S.-led strikes] has negative results,” said Jassem al-Jazaeri, a top political official from Kataeb Hezbollah, one of the main militia groups in Iraq. “The government might come to realize this in the coming days. We hope they will reconsider and not submit to foreign pressure,” he said, speaking to his group’s Etejah TV channel.

One group threatened to turn against Americans while another said it would “boycott” any operation in which the United States is involved.

Tikrit holds both strategic and symbolic importance. It was the hometown of executed dictator Saddam Hussein, the remnants of whose Baath party collaborated with I.S. last summer. And it is seen as a key stepping stone to recapturing Iraq’s second city Mosul, the jihadists’ largest hub.

The International Crisis Group warned that, so far, advances against I.S. paradoxically risked undermining what is left of the Iraqi state. In a brief entitled “Defeating the Iraqi state, one victory at a time,” the think tank said it was crucial to re-empower local elites, build credible local forces and provide services in recently re-conquered areas.

“This will only be possible if Iran… and the U.S. … pursue this objective instead of investing respectively solely in militias and disintegrating state institutions such as the army as the expedient answers to the jihadi threat,” it said.