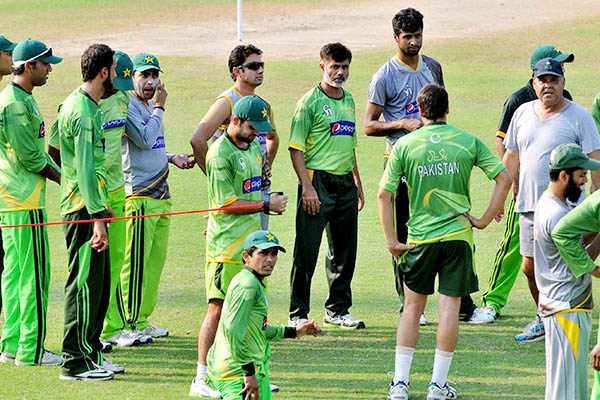 Pakistani bowler backtracks after telling TV channel a local coach might be better for the team.

Pakistan spinner Saeed Ajmal has apologized for remarks about national coach Dav Whatmore that triggered controversy and threatened their relationship.

In an interview with the Geo Super channel on Tuesday Ajmal spoke of the language barrier between Whatmore and the players and said former coach Waqar Younis had handled the side better.

Whatmore, who was born in Sri Lanka and grew up in Australia, said Wednesday on Twitter he was “deeply upset and hurt” by the comments from Ajmal, one of his senior players. The 59-year-old later tweeted that Ajmal had apologized to him in person and he had accepted it.

But the Pakistan Cricket Board (PCB), keen to avoid any disruptive controversy ahead of a difficult series in the U.A.E. against South Africa, then issued a detailed apology from Ajmal.

“I immediately went up to Dav and apologized and explained the context and circumstances in which I made certain remarks,” Ajmal said in a PCB statement released late Wednesday. “Dav has worked tirelessly with the Pakistan team and it would be extremely unfair not to recognize his services. I enjoy very good relations with Dav and am hopeful of continuing this in the coming series.”

Whatmore has been under pressure following Pakistan’s embarrassing Test defeat against Zimbabwe last month and faces the daunting prospect of tackling world number one Test side South Africa in two weeks’ time.

Numerous former Pakistani players have gone on record saying the side would be better off with a local coach.

Whatmore took up the Pakistan job in March last year with a big reputation as coach, having guided Sri Lanka to World Cup glory in 1996 and seeing minnows Bangladesh through to the second round of the 2007 edition of the tournament.

But Pakistan have not won a Test series under him and his contract is not expected to be renewed when it runs out in February.