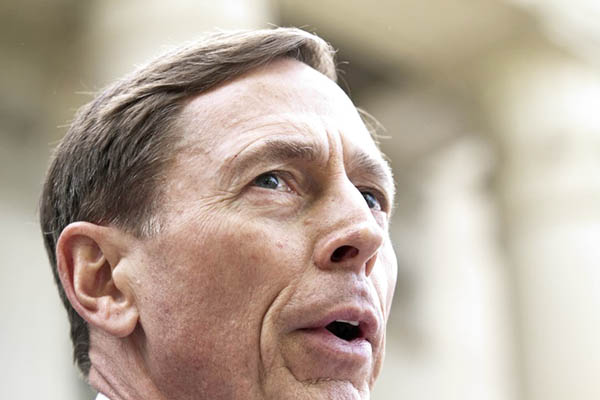 Former CIA chief claims ‘some individual’ fighters could be convinced to take on the extremist group in Syria.

Former CIA chief and retired general David Petraeus wants the United States to consider working with some members of an Al Qaeda-affiliated organization to tackle the Islamic State group in Syria, he said Tuesday.

In a statement to CNN, Petraeus said some members of the Al Qaeda affiliated Al-Nusra Front might be persuaded to join the coalition battling the I.S. group.

“We should under no circumstances try to use or co-opt Nusra, an Al Qaeda affiliate in Syria, as an organization against ISIL,” Petraeus told CNN. “But some individual fighters, and perhaps some elements, within Nusra today have undoubtedly joined for opportunistic rather than ideological reasons: they saw Nusra as a strong horse, and they haven’t seen a credible alternative, as the moderate opposition has yet to be adequately resourced.”

So, Petraeus argued, it may eventually be possible to “peel off so-called ‘reconcilables’ who would be willing to renounce Nusra and align with the moderate opposition to fight against Nusra, ISIL, and [Syrian President Bashar al-Assad.]”

Petraeus became a household name in the United States when he oversaw the troop “surge” in Iraq in 2007, and U.S. leaders credited him for salvaging the troubled war effort. Part of that operation saw the decorated general convince Sunni fighters to stop fighting with Al Qaeda and to work with the U.S. military.

His statement Tuesday followed the publication of a story in the Daily Beast that pointed out the irony of the United States working with anyone connected to Al Qaeda, which carried out the September 11, 2001 attacks and triggered America’s so-called war on terror.

The Daily Beast said several officials it had spoken to found Petraeus’s idea to be politically toxic, almost impossible to carry out and strategically risky.

In his statement to CNN, Petraeus said using any Nusra fighters would require “both the rise of much stronger, moderate opposition groups—backed, again, by the U.S. and the coalition seeking to defeat ISIL—and at the same time, intensified military pressure on all extremist groups.”

Petraeus, 62, had a spectacular fall from grace this year when he pleaded guilty to providing classified secrets to his mistress. He was given two years’ probation and a $100,000 fine.