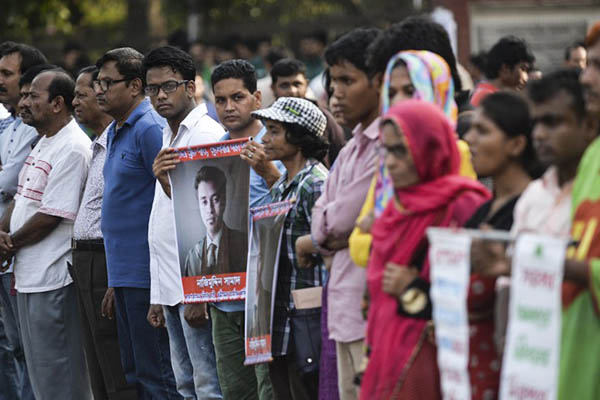 Ansar al-Islam says assassination is meant as ‘lesson’ to blasphemers.

A Bangladesh branch of Al Qaeda in the Indian Subcontinent on Friday claimed responsibility for the murder of a secular activist after he criticized Islamists on social media, a U.S. monitoring group said, as the government vowed to catch his killers.

Ansar al-Islam said its operatives were behind the murder of Nazimuddin Samad, a 26-year-old law student who was killed late Wednesday near his university in Dhaka by assailants carrying machetes, SITE Intelligence Group said. “This operation was conducted to teach a lesson to the blasphemers of this land whose poisonous tongues are constantly abusing Allah… the religion of Islam and the Messenger… under the pretext of so-called ‘freedom of speech’,” Mufti Abdullah Ashraf, a spokesman for Ansar al-Islam, said in a statement according to SITE.

Hundreds of secular activists held a protest earlier in the day to demand action for Samad’s death, the latest in a string of murders of secular bloggers and campaigners in Bangladesh. The murders have sparked international outrage and demands for the government to protect freedom of speech in the Muslim-majority country.

Police on Friday filed a murder case and said they were treating his death as a “targeted killing,” although no arrests have yet been made.

Abu Hena Muneem, a senior home ministry official, dismissed claims the government was failing to protect secularists and said the authorities were doing all they could to track down Samad’s killers. “The accusations are not correct. Our law enforcement agencies are working very hard to find the culprits and they will soon be arrested,” said Muneem.

Activists, however, expressed concerns about the government’s readiness to protect them as they held a protest march in the capital. Around 400 people chanted slogans including “stop the culture of impunity, save secular Bangladesh.”

“It is very worrying,” said Imran Sarker, a spokesman for Bangladesh’s biggest secular activists’ group Gonojagoron Mancha. “We wonder whether the government actually has the goodwill to put an end to this.”

Samad’s murder was the sixth such killing in 15 months. His childhood friend and fellow activist Gulam Rabbi Chowdhury said he had gone into hiding before the attack and deactivated his Facebook page for a number of months.

Al Qaeda in the Subcontinent previously claimed responsibility for the murder of an American atheist blogger in Bangladesh who was hacked to death on the streets of Dhaka in February 2015.