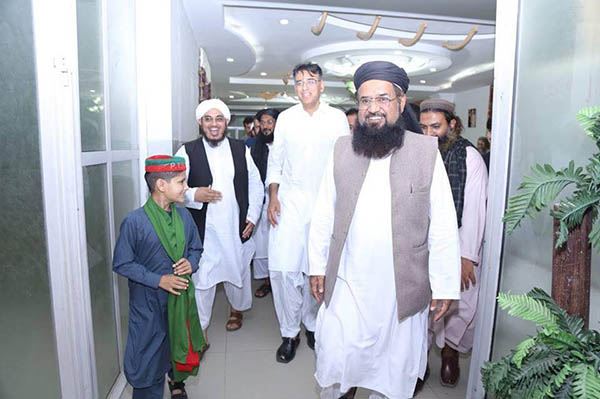 A U.S.-designated terrorist group has announced its support for Imran Khan and his party in general elections on July 25, the latest controversial outfit to back the former cricket star’s bid to lead the country.

The Al Qaeda-linked Harkat-ul-Mujahideen announced their support for the Pakistan Tehreek-e-Insaf in a Facebook post on Tuesday along with a photo of the group’s leader posing with a PTI candidate.

A PTI spokesman also confirmed on Wednesday that Khalil was backing their party in elections but will not be joining their ranks officially as a party member.

Khalil, an Islamabad-based cleric, is accused by the United States of plotting terror attacks in Pakistan, Afghanistan and India and of nurturing close links with Osama bin Laden.

The U.S. State Department describes Harkat as “a Pakistan-based terrorist organization that seeks the annexation of Kashmir into Pakistan and poses a direct risk to U.S., Afghan, and allied interests in Afghanistan.”

Pakistan earlier this year amended its anti-terror laws to ban those listed as terrorists by the United Nations from running in elections.

Former cricketer Khan—who led Pakistan to World Cup victory in 1992—has repeatedly called for holding talks with militants, earning him the moniker “Taliban Khan” in Pakistan.

Khan was also lambasted by critics for entering into a political alliance earlier this year with Sami-ul-Haq—the so-called Father of the Taliban whose madrassas once educated Taliban supremos Mullah Omar and Jalaluddin Haqqani.