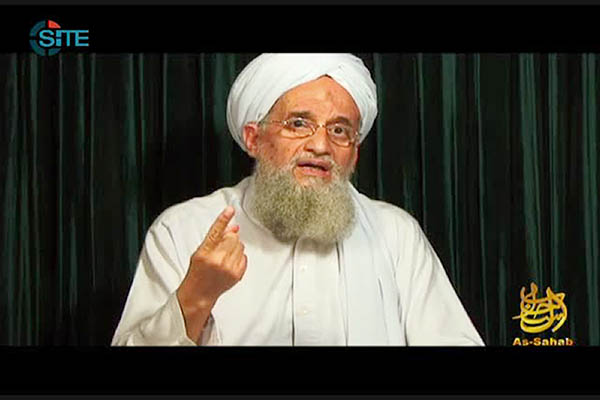 As Al Qaeda marks its 25th anniversary this month, analysts say the recent security threat in Yemen shows the organization’s center of gravity is shifting away from its historic base in Pakistan.

U.S. President Barack Obama has cautioned that affiliates such as Al Qaeda in the Arabian Peninsula (AQAP), a unit of the extremist group that effectively controls parts of Yemen, still pose a threat despite successful efforts to disrupt the organization’s core leadership. His warning came after the United States closed 19 diplomatic missions in the Middle East and Africa last week after reported intelligence intercepts from Al Qaeda suggested an attack was imminent.

Zawahiri assumed Al Qaeda leadership when Osama bin Laden was killed in a U.S. special forces raid in Pakistan in 2011 and the 62-year-old Egyptian is believed to be hiding in the border region with Afghanistan.

Rahimullah Yusufzai, an expert on Islamist groups in Pakistan, said that while the traditional core leadership of Al Qaeda—which was founded in Peshawar in 1988—still retains symbolic importance, its operational center of gravity has moved.

“In terms of strength, of power, of effectiveness, we can say it has shifted,” he said. “It is no longer Pakistan or Afghanistan, so most of the fighters, most of the affiliates, are not in Pakistan and Afghanistan. By and large, the plans are not coming from Zawahiri.”

Zawahiri, who has a $25 million U.S. government bounty on him, lacks the charisma of bin Laden but has long been seen as the brains of Al Qaeda.

“They don’t need someone as charismatic as Osama bin Laden was and they have I think ideological ammunition, ideological fuel which is helping them stay afloat,” he said.

The recent revelation of an ambitious plot in Yemen to seize control of two cities, as well as an oil export terminal, showed AQAP to be highly motivated, and Wuhayshi is believed to have been promoted to second in command of the global organization behind Zawahiri.

Daveed Gartenstein-Ross, senior fellow at the Foundation for Defense of Democracies, in Washington, said Wuhayshi’s promotion indicated Al Qaeda was broadening the ‘core’ leadership as AQAP grew in expertise.

“When we talk about Al Qaeda core there’s no reason it can only exist in Afghanistan-Pakistan—Wuhayshi being made the general manager, that very clearly makes him part of the core,” said Gartenstein-Ross. “We see a geographic shift towards Yemen but that’s not necessarily a shift to AQAP and away from the core—the way I see it, the core is expanding.”

Al Qaeda was established when the Soviet Union withdrew from Afghanistan, to unite disparate groups of fighters who had come to battle the occupation, with the aim of taking the jihad to a bigger, more global scale, attacking targets around the world.

But Al Qaeda franchises across the Middle East and north Africa have been increasingly active in recent years and Yemen’s geographical location makes it a more convenient base than Pakistan or Afghanistan for communicating with these groups, Gartenstein-Ross noted.

Washington has been keen to trumpet its successes against Al Qaeda’s central leadership, pointing to the bin Laden raid and commanders killed in the long-running U.S. drone campaign in northwest Pakistan and more recently Yemen.

But a recent report by Canadian intelligence gave a more cautious assessment, pointing out Al Qaeda leadership’s resilience and adaptability in surviving for a quarter of a century in the face of a concerted onslaught.

The report also warned the withdrawal of U.S.-led forces from Afghanistan next year, coupled with the Pakistani authorities’ apparent inability or unwillingness to crack down on the organization, could give it the cross-border physical sanctuaries it needs to survive.

Saifullah Khan Mehsud of Islamabad’s FATA Research Center, an expert on Pakistan’s tribal belt along the Afghan border that has been an important haven for Islamist militants since the 1980s, agreed.

“If Afghanistan is able to come to a common platform, if they agree with each other to have a common political vision for the country in some kind of alliance between different groups, then it will be very difficult for Al Qaeda to find sanctuaries there,” he said. “But if there is civil war Al Qaeda will be in a better position to find sanctuary there.”

The Taliban, which sheltered bin Laden until the U.S.-led invasion in the wake of 9/11, has said it will not let Afghan territory be used to attack other countries. It remains to be seen how sincere this commitment is—and given the growing strength of Al Qaeda beyond its traditional homeland, whether it even matters.

About time they relocated!

They can go anywhere except Pakistan…